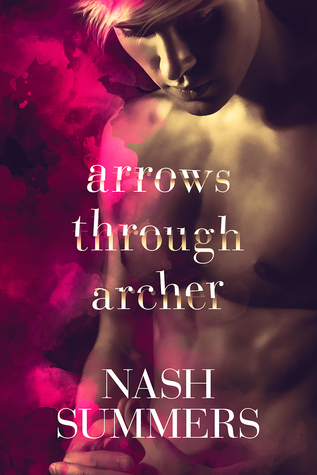 ”One morning I woke, but the two halves of my heart did not.” When those are the opening words of a book you know you’re in for a painful ride. It’s gonna hurt. Like. A. Lot. Add in the fact that it is a Nash write and you just know it’s gonna hurt so good and it did. It absolutely freakin’ did. I had a beautiful war going on of wanting to hurry up and read to get to the next page sentence word and at the same time wanting to read so slowly to savor. Clearly, I’m impatient and I gobbled this up like it was the softest, most delicious chocolate chip cookie with the perfect blend of crunchy edges and a mushy center. *ahhhhh* You get it? I may be a tad obsessed.

This story is about Archer “Ace” and Mallory, his best friends dad. But before we get to that, we must rewind. Archer lost his parents in a car accident and has been merely existing in a severely depressed state since. At college he meets Danny who is persistent and becomes his best friend, the only bright spot in his life. Adding to his already chaotic life, Archer is still very much in the closet. Danny is very perceptive of Archer and does a lot to draw him out of his fortress of solitude. Danny is also attuned to Archer’s moods and knows when he is in an unusually darker frame of mind.

“You can’t stay here alone over Thanksgiving.”
Eyebrows raised, I shifted my gaze to my best friend. “And your word is law?”
“It is when it comes to this.”
In that moment, I hated Danny and loved him so damn much. He was the only good thing in my life. I had no idea what I’d done to luck out with a friend like him, but I knew I didn’t deserve him. I didn’t deserve his understanding. And it was that twisting feeling in my gut that made me hate him—hate him for being one of the only reasons the pieces of me were held together.”

It is at Thanksgiving when Archer meets Mallory. Mallory lost his wife to cancer a few years ago and is also not living life to its fullest. He has accepted a lifetime of loneliness where he can continue to grieve his wife and work in his shop. Archer and Mallory seem to have a connection during this trip and once it’s over both men continue on being alone until life gets in the way; Archer is attacked by homophobic assholes that land him in the hospital. Due to the severity of his injuries and lack of people in his life, Mallory agrees to help Archer recuperate.

During this recuperation, Mallory and Archer form a bond. They get each other. Slowly, they begin to smile more, talk more, and share more. Then comes the lingering looks, a holding of hands, a brush of the arm, a dance, and then…

“What are we doing, Archer?” Mallory asked. Falling in love, I thought. But instead, I said, “Kissing.”

They “relationship” continues to grow, but for them life doesn’t have a clear-cut path.

“You don’t think what we feel towards each other is worth taking a chance on?” I asked.
He paused briefly. I watched a hundred expressions flicker across his face.
And then, “No.”

Three years pass and I think with each year that passed on the page, my heart became that much heavier. Dramatic much? Yes… but to be anything else wouldn’t do the writing justice. It made me feel that way.

With the passage of time, not much has changed. Both men are just existing. Separately. Then, one day they have a chance meeting at a pub they went to years before. I wish I could say that it was all snowflakes and rainbows from here. However, I cannot tell a lie. They go through a lot. Work through a lot. Feel a lot and we are along for the ride to find out if they can get past all of their baggage and take a chance.

The relationship with Archer and Mallory came together so organically. Each little milestone felt like climbing Mt. Everest. It isn’t your typically cheesy best-friends dad romance. Gahhhh, this was so much more. There were sexy times but not too much. Their sexual encounters were purposeful and added something to their relationship and the story. The book is split into separate POVs which provided the perfect insight. This book was heartbreakingly beautiful in the best possible way.

Thank you to the author for providing a copy in exchange for an honest review.