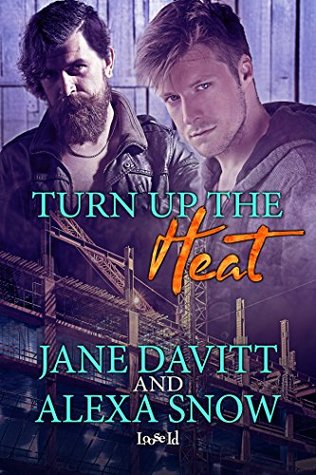 Originally reviewed for BMBR on June 6, 2017

The sex was hot, how could it not be with that much kink to choose from? There wasn’t even a hint of vanilla. Unless you count that one time they cuddled and went to sleep? *shrug* There was a moment when a rubber glove came out that I thought my hard limit was about to approach… False alarm, not an ounce of crisco in sight; they just needed to do a cavity search. The dirty talk. Ohhhh the dirty talk… Shannon was on his A game with them words he speaks.

Shannon meets Rory when he responds to an ad to buy a motorcycle. When Shannon comes back a few days later to test drive it… he ends up test driving more than the motorcycle.

“Promises, promises. I don’t want words, I want action. You drive that bike like you know what you’re doing, but how do you fuck?”

This was supposed to be a one and done type situation. However, Shannon and Rory couldn’t stop thinking about the mind-blowing sex they had and decided a repeat was needed. There wasn’t much outside of sex for most of the book. We know that Rory is a dietitian and Shannon works construction and sometimes a bouncer on weekends. The bulk of the story is built around their sex-life and Rory’s brother, Jude.

Jude has been in a lot of trouble throughout his life and apparently Fetal Alcohol Syndrome is 100% to blame for why Jude can’t make the right choices and function as an adult. Rory is always the one to bail Jude out; literally. This dynamic between the brothers ruined Rory’s relationships with his previous boyfriends and puts a strain on the relationship with his friends and parents. They all feel that he is enabling Jude’s behavior. This strain continues until Shannon comes along and approaches Jude differently than the others by holding him accountable and setting limits. Shannon’s approach to Jude brings him closer to Rory.

A big issue for the MCs in this book was their sexual compatibility. Rory has a strong desire for kink but neither Rory or Shannon have indulged in anything other than vanilla before.

“Who knew desire this overwhelming existed? Separate from love or any real knowledge of the man about to fuck him, his need for rough handling took him over, free from captivity at last, given full rein for the first time.”

“Being used for sex sounded great in theory. In practice, it was doing a number on his self-esteem.”

“I get him off, fulfill every jerk-off fantasy he dreams up. Is that making him happy? For now, sure, but long-term?”

A huge issue with both men is their lack of communication skills. Neither are able to do what is necessary to further their relationship. There isn’t a discussion on limits or lines and Rory steps right over it.

“Tell me, Doc, if you knew I was as vanilla as the image you project, if my dick was five inches not nine, would you still be interested in me? Because I don’t know who you think you’re dating, but it isn’t the man I see in the mirror. It isn’t me. And you were too busy getting your rocks off to notice I was uncomfortable.”

“I knew it wouldn’t last, but I wanted as much of you as I could get. Should’ve known it was a mistake. Can’t build on sand and expect it to hold up when the tide comes in.”

The remainder of the book brings us on a journey of discovery and limits for Rory and Shannon. They both have to figure out what they want in a relationship and the kink limits they are comfortable with.

This book was alright. The kink and last 25% moved it to 3 stars. The emotional connection was lacking for 75% of the book. I didn’t understand the point of their relationship outside of sex for most of it. It was almost as if they could walk away, no biggie. The remaining 25% really put a spotlight on the missing pieces. I finally got their relationship at the end and I wish that it was more developed throughout. There were some WTF moments that left me shaking my head. You’ll know when you get there. Especially around 74%. These WTF moments were meant to serve as a catalyst to further their relationship but instead really showed the lack of emotional connection.

Speaking of WTF…Let’s talk about the cover? Seriously? I’m a huge fan of beards and facial hair but this bearded guy makes me think he should be driving a creepy white van with candy in his pocket. I know, I know… Don’t judge a book blah blah blah. I judge and that cover doesn’t make me think Turn up the Heat.

Also speaking of WTF, this book had 2 big jumps in time without indication. These jumps left a lot of questions as to how they ended up where they did. One moment it was a hook up and the next they are having dinner with the friends. *confused* The secondary characters were funny and it seems that the next book has been set up nicely with Dex and Elliott.