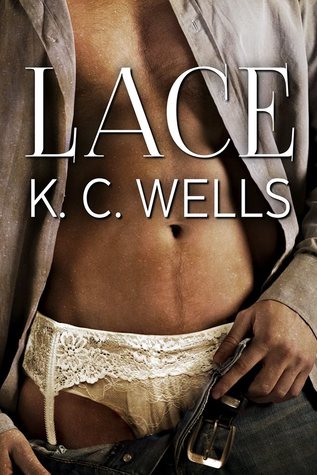 Welllllll, that was a cute little read. Lace isn’t a thought provoking, deep MC, profound story with a message, book. I don’t think it’s supposed to be either. It served its purpose on being a light hearted, fluffy, manties filled short story.

“Dave? Since when does a straight guy flirt with another man?”
Dave raised his head and peered at him through his eyelashes.
“Since he discovered that he’s not totally straight, but bi?”

After this little admission, Dave tucks his tail between his legs and runs without discussing this further with Shawn. After a week of avoiding Shawn, Dave shows up and they are supposed to hang out. While Shawn is in the bathroom, Dave decides he is going to be a do-gooder and put away Shawn’s laundry. This is when he discovers… wait for it…. THE MANTIES!!!!!!!!!!!!

“Yeah.” Another soft kiss to his ear. “I want to see you in these panties.”

Yassssssssss! One would think with Dave’s newfound confession and lack of experience with men that he would be tentative in the initial moments of his first time. Not. At. All.

“When he was close enough that he could feel Dave’s body heat, Dave looked up at him with a smile that made his heart beat faster, before bending lower and fastening his mouth around the head of Shawn’s cock that poked up over the lace.”

Still, this was a friends to lovers read that had me. It was cute and hot until it turned into a cheesy after school special around 81%. That “angst” was weak sauce.

“I’m sorry, but I had to say something. Don’t get me wrong. If it comes down to a choice between not having you in my life, or having you like this—I dress up in lingerie so you want to fuck me—then fine, I’ll take you like this. Right now I’ll take what I can get.”

Huh? Dave likes your kink and then it becomes the main issue in the book because after having sex a couple times you think that lace is all he wants from you? *rolls eyes* The bigger drama should have been Dave outing your kink to a “friend” at the gym. Oh well.

As for editing, I had an issue with formatting. I read all books on my kindle app with a black background and white text. Throughout the read, I noticed as I turned the page there were missing words. When I switched to a white background and black text the words magically reappeared. No idea why this was an issue but it definitely messed up my groove at times.

Anywhoo, with reality suspended and a few eye rolls, I was able to enjoy this kink-lite read on a lazy afternoon. I’d recommend it to manties fans who are looking for something that is light and fluffy.