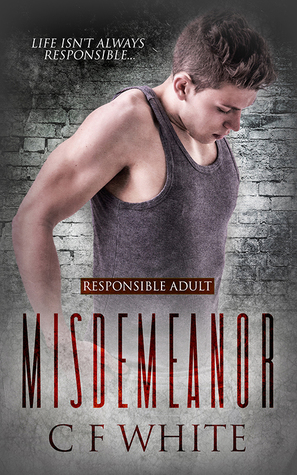 Let’s start off with a warning. There’s a cliffhanger at the end.

If cliffhangers aren’t your thing either, I would definitely wait until the next book is out. This isn’t a little one. It’s freakin’ huge. Also, there should be a trigger warning for abuse and suicide.

This book was a perplexing read because there were many moments where I was really enjoying it and then moments when I was scratching my head. It’s an average length read at just over 200 pages but to me read reallllllllly long; especially the first half.

In Misdemeanor, we get to know Micky; the broody, closeted and almost reformed bad boy. After the gruesome death of his mother and the kicking out of his dead beat dad, Micky becomes the sole caretaker of his special needs little brother, Flynn. Sweet Flynn was the star of the show with his quirky, bright and literal personality. Micky gets a job at the grocery store (Morgan’s) and that’s where he meets Dan, his boss. Dan is the ultimate nice guy. Micky and Dan forge a pseudo-friendship that leads to benefits.

Oh the benefits. Things go from their first kiss to fucking in 2 seconds flat…. ok, maybe like 20 seconds but still. Micky knows his way around a man and isn’t afraid to show Dan. With this added complication, the whiplash begins. Micky was very hot and cold with Dan and has a hard time reacting when life throws a curveball. Dan just wants to be a part of Micky and Flynn. He wants to be the someone that Micky needed. It was sweet to see how their relationship changed throughout the second half. Obviously, with as much baggage as Micky is lugging around, Micky and Dan hit a lot of speed bumps.

“Hey, I get it. I get you’re angry,” Dan pleaded. “But don’t shut me out.”
“Shut you out?” Micky scoffed with a callous chuckle. “You barely got in, Danny.”
“One layer you peeled. One. Don’t try to go any further. It ain’t fucking pretty.”

Their relationship wasn’t the only angst present. Micky has a lot of bottled up emotions about the death of his mother as well as the trauma from an abusive father. Also, as Flynn’s only caretaker, Micky has to prove himself stable enough to become his guardian. To make matters worse, Flynn is having a very difficult time at school with other kids. Flynn has been picked on and injured which makes Micky have even less patience for those involved in hurting Flynn.

There are a lot of different components of this story that piece together to make a rather enjoyable read. However, there’s a troubling one as well. For some reason, there is a big focus on being overweight. A. Lot. I was really hoping there was a reason for this and that it would reveal itself in one of the MCs as the story progressed. Maybe they had an eating disorder? IDK, I was hoping anything would make this relevant. It didn’t. It came across as a very odd obsession on the author’s behalf throughout the entire book. I love a chiseled 6 pack and jaw as much as the next person but I don’t have to body shame to make that point. I highlighted dozens of instances where a character was referred to as fat, chubby, how much is consumed and the noises they make while eating, how they get stuck in booths because they are too large, etc… Not all, but most of this was written about Dougie, a grocery employee. I didn’t understand why so much emphasis was written about Dougie’s size, his multiple chins and his apparent obsession with food. It added nothing and with every occurrence, detracted from the story.

“The shirt rubbed against the curly dark hairs scattering his fat body and made the unbearable scraping of nails down a chalk board.”

“His dark hair was always closely cropped and his newly grown beard managed to mask his many chins.”

“The long brown overall uniform Dougie wore was one of the largest sizes Dan had ever ordered and yet the buttons still stretched around Dougie’s midsection.”

That’s just a sampling and I don’t get the point? If these character “thoughts” were supposed to add humor, they failed miserably in execution.

I took a star off for shaming on a story that I would have otherwise enjoyed. Unfortunately, for such a big part, it added nothing.