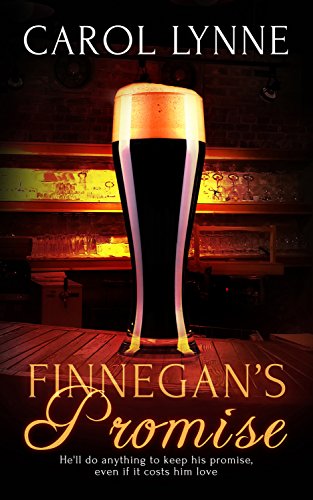 I tried…like REALLY tried. I was like The Little Engine That Could saying “I think I can. I think I can.” Until I couldn’t.

If you’re a Carol Lynne fan, this review may be a moot point and you can continue on in your love affair. This is my first Carol Lynne read and most likely will be my last. We just don’t click. At. All.

I knew at 3% that it wasn’t going to go my way. With zero character development or MC interaction, Fin already had a hard cock by just peering over at the bartender. I suppose it could happen. *shrug* I just like to have a little more character development, world building, ANYTHING before “staring at Mr. Gorgeous with a stiff cock in his jeans.”takes place. Throw me a bone here… not that one.

Once the pole in Fin’s pants deflates, we are introduced to Dominic (Mick) Sullivan AKA Mr. Gorgeous and Calder (Fin)negan. Fin is a professional football player and came home for a month to take over the bar for his dying father even though he doesn’t know his “da” is dying. At the bar he meets Mick. All of that sounds reasonable, right? The execution, not so much.

The dislikes and cringe worthy moments were adding up faster than my one-click book purchases on Amazon. Based on my bank account, that’s at an alarming rate.

Exhibit A:
“He could swear that Mick had come on to him on several occasions over the last ten days.”

Then on the very next page. Wait for it…

“Mick deposited the drinks on the tray and straightened again. He glanced over his shoulder at Fin and subtly stepped back into Fin’s rock-hard cock. He moved his ass from side to side, rubbing himself against Fin’s erection.”

This is at 11%… mind you, no conversations have happened about attraction or interest or anything. Nada. Zilch. They didn’t even talk on page prior to this grind session.

Exhibit B:
After working together 10 days which is also the first night they hook up, they are making “love.”

“Would you make love to me once before we go to sleep? I don’t have any lube but I’ve got hand lotion on the table beside the bed.” Also, this “making love” takes place directly after two other mutual orgasm sessions on the couch and in the shower.

Exhibit C:
Condoms schmondoms *smh* But that’s ok because “I’ve got paperwork in the other room.” This was probably for the best because I don’t know how condoms would work with shampoo, gel, lotion and olive oil as lube? *eye roll*

Exhibit D to Exhibit Whatever:
There was jealousy on the night of their first hook-up over a pair of pajama pants Fin borrowed which led to a hidden identity revelation.
They fell in love before two weeks and from there couldn’t live without each other.
“I was trying my best to imprint you into my mind and heart and the emotions were so true, so…beautiful…that I felt…” *gag*

Exhibit I-lost-count:
If you’re a football fan, you’ll probably understand the ridiculousness of this next gem which is in response to Fin having to go back when football season begins again and be separated from Mick by distance.
”Hell, I’ve never tried a relationship, but maybe I could talk to my agent about getting traded to the Patriots?”
I’m sure agents are all on board for looking in to a trade option to save a two week relationship? But even if they were, slow your roll, that’s not how trades work anyway. *bangs head*

By now, I hope you can see that this book was on life support from the very beginning. Unfortunately, I can’t recommend this at all.