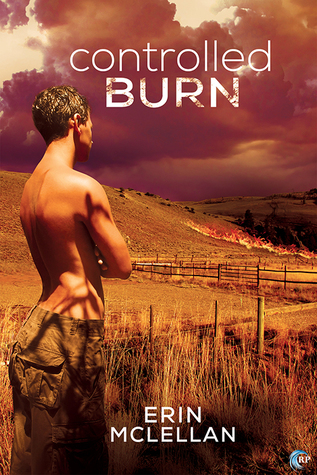 If I could make it rain with stars, I totally would for this book. It was sooooooo good. I typically approach read-for-review books differently than I do non-review books. I go into the reading experience with the mind frame of making sure I highlight, take notes, stay focused, etc… However, I was captivated by this book from the very beginning and was unable to approach it from any other way than completely immersing myself in the world that was Joel and Paulie.

The synopsis for Controlled Burn is what pulled me in with all its angst, broken characters, and chance for redemption. The premise was so unique that I couldn’t stay away and I am freakin’ thrilled that I didn’t. So. Damn. Good.

Joel is going through life suffocating under a blanket of grief. The death of his high school boyfriend (Diego) causes him to live every day burdened with guilt. To numb the pain he hooks up enough to escape but not to fully forget because forgetting would mean losing Diego all over again. Joel is at college when he meets the unapologetically “swishy”, Paulie.

“It hurt knowing that someone else was filling that broken chasm that Diego had left behind. It hurt to care for someone and want someone like I had once cared for and wanted him. I wasn’t ready to replace or lose Diego and didn’t know if I’d ever be.”

Joel is unable to resist the charming and confident, Paulie who inserts himself in his life. Paulie has a lot of baggage as well but they worked beautifully together. They found homein each other. Just like with any home, nothing stays perfect. There is angst. A lot of angst. Cracks form in the foundation of their relationship from secrets and lies and soon their walls begin to crumble. The grief, guilt and struggles Joel encounters throughout were so authentically written and Paulie, fierce and fragile tries to hold on before it all slips through his fingers.

There was a lot of sex in this book and they had great chemistry. But it wasn’t like typical sexy books. In here, there was SO much emotion in every touch and kiss that it was almost as essential to them as their next breath. So much of their unease is wrapped up in sex so it’s only natural that they communicate their fears, guilt, and love through it.

Joel and Paulie aren’t the perfect couple and their journey was realistic. They had huge obstacles to overcome and sometimes that meant continuing the journey alone. Luckily they had some awesome friends and “family” to pick up the crumbling pieces. Even during those times, the love they felt for each other was heartbreakingly clear. Controlled Burn is all about them finding their way home; not to a perfect house with a white picket fence. But to an imperfectly perfect home that’s held together by blood, sweet, tears and ultimately love.

As a warning, although there isn’t cheating, there is an MC separation. Also, there is a trigger warning for depression and suicide attempts for a secondary character. I would definitely recommend this book for those that love romance with a side of angst and a huge helping of fierce love. I look forward to potential books in the future with the amazing cast of secondary characters. *Making it rain with stars*

ARC provided by NetGalley in exchange for an honest review.