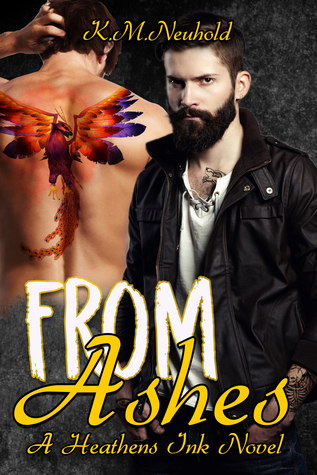 You know what I thought while reading this? Playing dress up. Did you ever play dress up in your parent’s clothes when you were a kid? Just to walk around and pretend to be an adult for a tiny bit of time? That’s this book. The kink, the drama, the “intense” situations and the character reactions all reminded me of kids trying to act like adults. Which is odd because there were some very adult situations taking place but their responses and the execution fell a tad bit short.

Adam is a closeted bisexual that has a hero complex after his younger brother committed suicide. He owns his own tattoo shop that provides refuge and work for many men (and a woman) that needed a second chance. He chats online with “Phoenix” when Phoenix is at his lowest point. Both men form a bond though they remain anonymous and hundreds of miles separate them. Throughout the year they talk and Adam repeatedly asks Phoenix to come to Seattle until one day he stops hearing from him.

Phoenix AKA Nox is a heroin addict that “whores” himself out to pay for his next fix. He lives with his psycho boyfriend and looks forward to his chats with Adam. He’s lost and doesn’t know how to break the cycle of using.

“I’m the spider in the sink, scrambling for a foothold, but inevitably being pulled down the drain.”

After his psycho ex earns his nickname of psycho, Nox heads to the hospital and then to rehab. After rehab, he finally takes Adam up on his offer and heads to Seattle; to Adam’s tattoo shop. Nox is offered an apprenticeship and after a few days, reveals that he is indeed Phoenix. Their relationship begins shortly after this revelation.

Let’s talk about the good stuff. The bones for a good story were there. Meeting online, forming a connection, tortured soul, tattooed white knight, breaking addiction, coming out of the closet, family of friends, etc…, all good. Also, the connection between the MCs had a chance to develop organically. Insta-love didn’t take place because they knew each other prior to ever meeting face to face. Their relationship was believable and had a solid foundation. The development of the MCs in the beginning had me rooting for them.

I had a few issues with the execution.

On top of the stuff already mentioned, there was stalking and a crazy female ex-fuck buddy. There was already enough going on and the crazy ex drama didn’t add to the story. Also, there was a lot of deep subject matter that was taken with a grain of salt. Prostitute? No biggie. Lit on fire to die? No prob, just make sure you’re on heroin to take the edge off. Homeless, addict, junkie mother. Everything basically glossed over. There was a lot of telling and not showing throughout which I attribute the lack of depth and clarity to.

As I said, the bones of the story were good. The transitions, time jumps, developments and resolutions were just… there, and lacked the finesse to smooth the way. It was just ok. On the plus, I do like my white knights with tattoos. *growl*