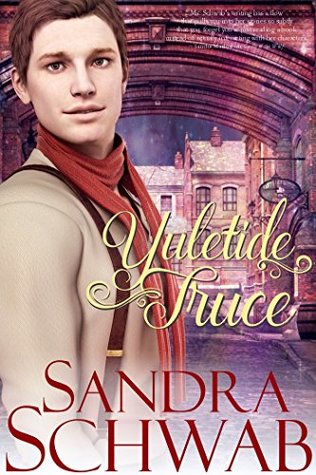 Merry Christmas!!!!!! It’s that time of year we all know and love with all of the ugly sweaters, countdowns to how many minutes are left until Christmas day, AND

Oh yeah, and all the Christmas books we get to enjoy. This book had 3 things going for it that initially drew me in; It’s a historical m/m, it’s only 68 pages, and I needed a reality escape and thought Christmas in September would do the trick. Historicals seem to be my drug of choice lately and one of my favorite worlds to get lost in. This book was no different and I devoured the 68 pages like a bag of chips. I enjoyed this short little read and wouldn’t have complained if it was longer.

Yuletide Truce takes place in 1845 London around Christmas time. Everyone is feeling the Christmas cheer except Alan “Aigee” Garmond and Christopher “Adonis of Fleet Street” Foreman. Well, Aigee would be feeling all Christmasy if Foreman wasn’t being such a buzzkill and putting a damper on his favorite time of year. Aigee works in a small bookstore and reviews books for their little magazine. Foreman writes for a more fashionable publication and “has taken an inexplicable and very public dislike to Aigee’s book reviews.” After another scathing review, Aigee decides to confront the infuriatingly gorgeous writer and put an end to the bad press affecting his boss. This confrontation doesn’t go well because the Adonis is an asshat and Aigee loses it and rips him a new one. Bah-humbug!

Days pass and Aigee decides to visit his old neighborhood. You can take the boy out of the slums but you can’t take the heart of the slums out of the boy. While visiting, he spots Foreman being led down a questionable back alley. Out of the goodness of his heart, Aigee follows and lucky for the Adonis, is quite the street fighter because he saves his tight little ass. Foreman isn’t in the best shape and ends up in Aigee’s rooms for some much needed rest and sex. *Rewind* Huh? He just got his ass kicked with one eye swollen shut and after the blood is wiped away, it’s time for a blowjob and some friction. *sigh* I didn’t hate it though…because I’m a perv like that. Ok, Ok, before they had sex, they called a Yuletide Truce “a ceasing of hostilities in the spirit of the season and all that.” Then the sex.

This was a enjoyable little enemies to lovers read. I liked Aigee and Foreman together even though we don’t get much on page time with them as a couple due to the length. It wasn’t all jingle bells and mistletoe after the truce was called but the HEA was hard-fought. As I mentioned, they hooked up right after the altercation and the transition from conversation about a friendly truce to Aigee offering a “tongue-lashing” was abrupt and lacked finesse . However, outside of that questionable transition, it was a well rounded shorty that I enjoyed and got me through until my next hit of historical. Definitely recommended.

P.S. The cover reminded me of something my grandma would watch on the Hallmark channel. I’ll overlook it since it’s a Christmas book and I’m supposed to be merry and full of good tidings and shit like that.