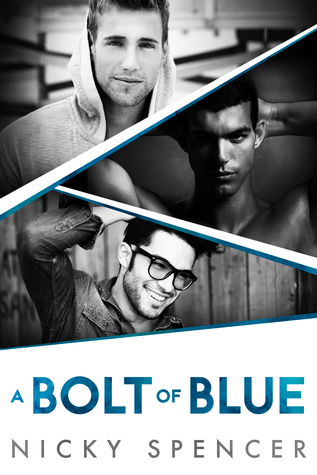 This book was difficult to rate. I’ve gone back and forth and all that thinking made my brain hurt. There were parts that really worked for me and then parts that just didn’t. Parts that I wanted to slow down and parts I had to hold myself back from skipping. When I read a book that has a party of three, I always look to see if they’re all treated as equals and that their love/connection works in pairs as well as the trio. It didn’t IMO and I hope I’m able to adequately explain what didn’t work for me.

Mitch and Ian have been best friends for most of their life. They’ve always had a platonic relationship but Ian has been completely in love with Mitch for years. They have a very close relationship that borders on more than friends but Mitch has been too blind to notice and Ian has been too reluctant to tell Mitch how he feels. They are both busy with school, Ian working as a CNA and Mitch playing college baseball. Finally, Ian can’t take it any more and HAS to tell Mitch how he feels. They meet up at a bar and Ian is totally terrified but ready to spill… that is, until Mitch’s secret, Greek god, bartender boyfriend comes up to their table and gives Mitch a kiss.

Mitch and Dusty met at Angel’s bar, where Dusty is a bartender. What was supposed to be a one night stand turned out to be a relationship that Mitch kept under wraps. By time Ian finds out about the relationship, they have been together almost 7 weeks and are in love. It’s a very tough pill for Ian to swallow but he does for the sake of Mitch’s happiness. However, when Mitch and Ian hang out, there are these “moments” that are opening Mitch’s eyes to his feelings for Ian even though he still loves Dusty.

Ian and Dusty have also been spending time together while Mitch is off taking care of his sister’s issues or playing baseball. It’s during these times with Ian and Dusty that they start to develop feelings for each other until one drunken night, they kiss. This sets off a domino effect of issues for all of them to work through. While they do get their HEA, Mitch has to work through the “betrayal” and all the feelings between Ian and Dusty and Mitch’s with both men.

I had a hard time with Mitch. He grated on me with his overly dramatic personality, judgy statements, and everything surrounding his sister, April. I didn’t understand the need for April’s storyline outside of creating potential drama for Dusty and Mitch which detracted from the story IMO. The introduction of April and her issues wasn’t smooth and as it was first happening, my thoughts were along the lines of, “Oh gosh, here we go.” I also didn’t believe the relationship between Mitch and Dusty. Outside of sex, they didn’t have depth. Don’t get me wrong, sex is always a plus but, I needed more and they didn’t have it. They never shared anything meaningful but when Ian came along, Dusty was spilling his soul to him. That didn’t work because Mitch and Dusty were supposedly in love and they had found the one but couldn’t share anything beyond orgasms and food.

Now, Ian and Dusty is where it’s at.

They worked. They had a great connection and the depth in their relationship was so evident that it highlighted the shortfalls with Mitch. They had awesome chemistry and my kindle started smoking just from their kisses. I wouldn’t have complained if this was a M/M starring them. They were a team whether it was in the kitchen cooking, cuddling on the couch, or getting it on. I was a huge fan of them.

Mitch and Ian never really found their stride. They didn’t seem to be equals in the trio even though they were life long friends. It remained awkward and they never quite got to the point together to even come close to how Ian was with Dusty.

The POVs changing with each chapter was a little hard to get into at the beginning. I’m sure by now you can all guess that I would have preferred Mitch’s POV to disappear. *shrug* Another addition to the story that had me rolling my eyes and shaking my head was Trevor. He was a guy that Ian went out with twice to try and get over Mitch. There was enough going on with the three MCs coming together, the implications of said relationship on family/friends, and the bar drama to make the book work. Trevor was as pointless to my reading enjoyment as the April storyline and yet both brought so much drama.

There should be a trigger warning for mentions of sexual assault. The facts in the story are contradictory from the actual event to when it was mentioned at the end. However, it’s worth noting. There is also cheating by way of kissing prior to the three of them getting together.

This was a decent read. I don’t expect each MC to share the exact same likes, desires, bond and relationship with both the other men but I do want them to all feel equal and share some depth. While it didn’t fully work for me, I could see this being an okay starting point for those new to menage books.