Like a Gentleman by Eliot Grayson: Review by Lost in a Book 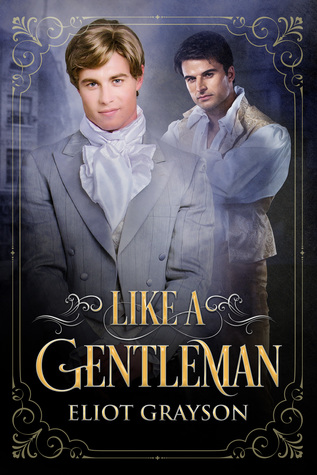 James Rowley, penniless younger brother of an earl, discovers his rejected sensational story has been stolen and printed under another name — and he’s certain his editor is the guilty party. Determined to get his due, he sets out for London to take revenge on the perfidious L. Wells. He means to have satisfaction, even if he needs to pose as a simpering fop in a pink waistcoat to get it.

Two years before, intrigued by his favorite writer’s talent and wit, Leo Wells had visited the Rowley estate incognito, seen James’s portrait — and promptly lost what was left of his heart. Ever since, Leo has fought his obsession with his favorite writer. Unaware of the manuscript’s theft, he’s bewildered and heartbroken when James, acting the part of a sneering dandy, visits him in person only to use his obvious attraction against him.

From Gloucestershire to London to Portsmouth, can two men with society and secrets dividing them find happiness?

Actual footage of me when I stumble across a new m/m historical romance:

What? I can totally pull of the greedy unicorn look!!

So much excite!! Seriously.

Luckily, this one didn’t disappoint and I knocked it back faster than a bottle of fine wine. Like a Gentleman is a short book at 69 pages but it’s a fully realized story that packed in everything I love about the genre.

James is a gentleman and brother to an Earl. He is typically laid back and doesn’t act in a manner befit of his station. Well, until he realizes that his manuscript has been stolen and published under another name. The anger he has at being plagiarized provides enough motivation to start acting like an uptight gentleman with all the bells and whistles of an OTT dandy. With his fop armor in place, James meets with the only person that could be responsible for such thievery; L. Wells, his editor.

L. Wells (aka Leo) has been obsessed with James for years. Their correspondence, typically snarky and witty in nature, has served as foreplay over the years and only stoked the fire on his feelings for the gorgeous James and his mischievous smile. They’ve never met until James storms into his office full of arrogance.

I won’t provide too many details on the plot but will say the events that follow are full of snark, humor, humiliation, passion, and repentance. There were times when my heart felt heavy for Leo and James; each at different moments. There were other times where I was smiling like a goof because of the antics taking place and the sexy cat and mouse game they were playing. Then, there were times where my kindle was gonna explode from the chemistry. They had it in spades. Oh, did I mention hate sex? *drool* It was all angry, growly, and pinning to the wall… and then there was that shift where the hate eased into an all consuming need.

”Anger warred with tenderness. He wanted to make James beg; he wanted to give him everything.”

I loved Leo and wanted to hug him while at the same time, climb him like the perverted monkey I am. James could be an ass but it didn’t make me like him any less either. *shrug* I really enjoyed this book. Was it perfect? No, the ending could have been a tad slower paced from the anger transition to all is well. I consider it a win that I wanted it to be longer. The cover while appropriate, doesn’t give me cover-lust. This book was well written and engaging. I hope another story will be coming my way starring James’ friend, Turner. *hint hint* *nudge nudge* Definitely recommended for fans of historical romance.

Thank you to the author for providing a copy in exchange for an honest review.