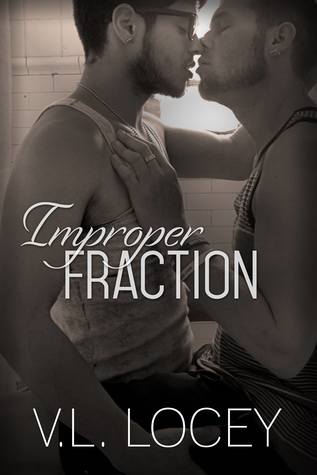 This book hooked me with the geeky title and its nerd/baseball player MCs. Everything else was supposed to be icing on the cake. And it sorta was for about half of the book. But just like when you eat too much cake, the deliciousness of the first few bites just can’t hold up throughout the whole thing. That’s what happened with Improper Fraction. The first half was everything I love about romance and the second half…

O’Malley (Mal) Ramsey and Garrison Rook grew up together. They were inseparable until a kiss between them after high school graduation led to vows made for a future that would soon be denied. Since the moment Mal realized he was gay, he has been out and proud. Garrison has internally struggled with his attraction to men and never acted on it until the kiss with Mal. That kiss scared him and Garrison cut off all communication with Mal until 4 years later, after college graduation. Mal is working at a math and science camp for the summer and Garrison’s little sister is attending. Garrison tags along too, under the guise of providing athletic opportunities to all campers.

When Mal and Garrison see each other for the first time in four years, it’s very strained. Garrison has some groveling to do and I love that Mal makes him. Even with the years of separation between them, there’s still so much love, friendship and chemistry. I loved “seeing” them come back together and the stolen moments of heat when the campers were sleeping.

After camp ends, Garrison still has to contend with coming out to his family and his minor league baseball team. Mal is there to support him but it’s a very stressful time for Garrison as he worries about parental expectations and being the first openly gay minor league player.

The scene is set for future angst as Garrison finds peace in who he is and decides when/how he will come out. I was on the edge of my seat while reading, wondering how this would pan out. I couldn’t put it down. Until, mid-way through when a wrench was thrown in the plot and high school bullies turned adult “Bigot Brigade” were introduced and became the focus of the second half.

From then on, the ground work laid in the first half, the major focus on sexual identity and its implications on family and career were brushed under the rug and glossed over. Literally, the coming out scene with his parents was a few pages and the coming out with his team? One. Sentence.

Obviously my enjoyment declined drastically after this shift. I was bummed. Big time. The first 45-50% I was all in. I was giddy about this nerdy, estranged best friends to lovers romance. The building up to reconciliation and a little after had me hooked. I really like Mal and Garrison together. The scene Garrison acts out from Mal’s favorite movie… *swoon* The second half dragged while everything surrounding the bullies, the reactions to them and the subsequent climax of that situation was unrealistic, OTT and unnecessary IMO. The bullies read like an afterthought thrown in that detracted from what was otherwise a very enjoyable read.

The writing style was smooth and the pacing kept the story moving along during the first half. I’m hoping that by release, this will have gone through another round of edits. The cover doesn’t really represent the book or the MCs. I would have rated the first half at least a 4 but unfortunately I have to account for the second half. With all that said, I’d recommend it for the first half alone because I really like Mal and Garrison and that they got their HEA… even if I was shaking my head and rolling my eyes at the huge second half shift and the ridiculousness of the last 10%.

“Garrison and I aren’t right anymore. We’re like an improper fraction.”

“Of all people, O’Malley, you should know that there are ways to convert an improper fraction to a mixed fraction.”