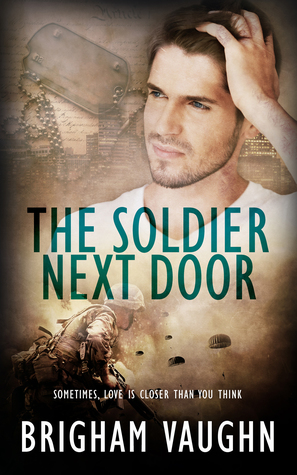 Holy short story Batman!! I didn’t even know I was at the end until I turned the page at 84% and hit an excerpt for another book. Umm… ok? The good news is that I was interested in reading more. The bad news was the ending was rushed and many parts throughout were glossed over, which compromised the completeness of the story.

Owen is an 18 year old recent high school grad that enlisted in the Army. He’s also a virgin and wants to cash in his v-card before he ships out for basic in a month. When his parents go on vacation and ask Travis, the next door neighbor to keep an eye on Owen, he decides that close, penetrating contact will be the best course of action. Repeatedly. Travis, being such a nice guy, is willing to help Owen out and take one for team USA.

What started as a cherry popping turned into a month long sex-fest. The men get to know each other as more than just neighbors and when Owen ships out, they continue their “relationship” during stolen moments through basic and even into Owen’s first duty station. Feelings become involved and then Owen goes radio silent and leaves behind a heartbroken Travis.

It isn’t until a July 4th BBQ five years later that the men see each other again.

So then what happens? I don’t know. It ended. They got a HEA or maybe it was a HFN? Or it’s whatever blow jobs and fire works equate to?

There was a story there and could have definitely been expanded to be a longer novella if not novel. I enjoyed the bones of the story and the characters were likable. I wouldn’t mind a reworking to add length, a fully realized plot, and added depth to the characters beyond the shallow details that we were given. The potential is there but this is more of the CliffsNotes version than an actual, fully fleshed out story.