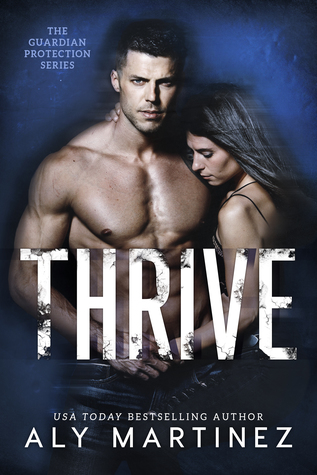 Reviewed by Lost in a Book

I’m a fan of this Guardian series Aly Martinez. She’s one of the very few M/F authors where I’ll read whatever she writes (bonus points because she can write a damn good M/M, too). We just click and this next book in the Guardian series isn’t any different.

This angsty, suspenseful, and sexy second chance romance is set up with a long separation period. A lot of life happens in the 17 years that the MCs were separated and unfortunately for Lark and Mira, it wasn’t filled with happiness.

Seventeen years ago, Lark and Mira were in love, with stars in their eyes, and plans of a future. There was just one teeny tiny problem… Mira’s actual boyfriend, Kurt. They were young, dumb, and dysfunctional. When it came time for Mira to pick, she chose Kurt.

It was completely evident that Kurt was a cheating (I know, pot/kettle) jackass and she STILL chose him. *Grrrr* Anyway, fast forward time and Lark is a successful badass/Mira hater working with a private security firm while Mira is living in the slums, divorced, and now scared for her life. Good thing Mira is a little Lark stalker because she knows just where to find him when her life and her friend’s life is in jeopardy.

What starts as a hesitant phone call for help sends Mira and Lark on rollercoaster of danger, action, clarity, crime, drug lords, shootings, and kidnappings. And sex. And arguing. Lark taking on Mira’s case brings them in close contact 24/7 while they piece together the reasons behind her new danger. They have a truck load of old hurts to wade through while forging a path for the future. They are hot together. Smoking. But, Mira also argued or had a “snit fit” A LOT. Luckily for her, Lark got off on all the attitude. Unfortunately for me, Mira drove me bat shit crazy when she went off. *shrug* I believed their connection and chemistry. I felt their hurt from 17 years ago and how they hadn’t *really* moved past it even as the years passed them by. I fully appreciated the road they took to get their HEA. They moved fast but they also didn’t hide the hurt, hate, frustration, confusion, and most importantly, love.

The secondary characters were awesome in this one as well as the first. The Guardians are a bunch of gossiping biddies who are quite efficient in their jobs because they have a bunch of time to interfere. At least their interference was comical and I can’t wait for the other guys to get their stories. Especially Johnson *dreamy sigh* because I just know it’s gonna be an epic M/M (or MMF). Another thing I absolutely love about Martinez’s writes is the ability to include past characters from previous books without being awkward or gratuitous. There’s a purpose as they are mentioned/connected and a new reader to her writes wouldn’t feel lost at their inclusion.

This book won’t leave you wanting as the epilogue is *very* thorough. I definitely recommend this and will wait not so patiently for the next man up.