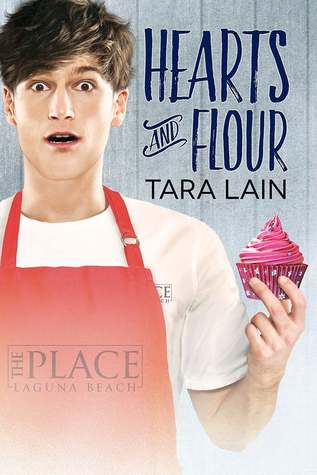 I think it’s important to note that when reading the blurb I somehow missed the word orgiastic. If I had paid better attention, I probably wouldn’t have chosen a story with that being important enough to mention in the synopsis. But, I did choose it and in turn gave my best shot at enjoying it.

As the blurb mentioned, Micah is obsessed with health and eating raw. He’s extremely uptight and wants everyone else to be just as passionate about their health and consumption of shakes that smell like “fresh cut grass.” When Micah catches wind of some sugar and flour creations in the hands of his loyal customers, he nearly loses his mind.

“She looked up at him with big brown eyes. Her cheeks bulged hamster-like and the huge godforsaken cupcake she held poised in front of her face sported a large missing piece. Frosting clung to her lips like cocaine on an addict’s nose. “Mmmpfff.”

Quentin is new to town and opened a Cupcakery that’s become extremely popular. He’s kind, laid back, takes care of his grandma, and still locked in the closet along with all the dresses, wigs, and manties he adores wearing.

After breaking up with his cheater boyfriend, Micah gets invited to the orgiastic party.

“A night of meaningless sex in the name of anti-Valentine’s Day, right? Screw Cupid and all manufactured holidays.”

At this “party,” Micah meets Queen (Quentin) in all “her” red dress, blonde wig, and thong wearing glory. Obviously this is a fuckfest party so Queen and Micah waste zero time getting down to business.

“Queen’s lips came up by Micah’s ear and one hand grasped Micah’s dick. “I want you to stain me and muss me. Ride me and put me up wet, darlin’.”

Before departing, Micah gets Queen’s number so they can actually get to know each other beyond a quickie in the bathroom.

The rest of the book didn’t increase my enjoyment either. Miscommunication, irrational reactions, a crazy ex, and a focus on sex which wasn’t compelling enough to keep my interest left me disappointed. Quentin is from the south and for some reason has this completely affected speaking vocabulary. I’m from the south, have lived in many southern states and it felt *very* fake. Also, he’s 24 and says dear. A lot.

Their conversations were awkward, and interactions cheesy. I’m talking a straight up cheesefest.

Anywhoo, it wasn’t all negative. I liked Quentin’s sassy grandma. I also liked the way Micah was so uptight about the cupcakes at first. His reactions to them made me smile and I was looking forward to the epic moment when someone loosened the strings on his control. Another positive was manties… because manties!