On His Knees by Laura Kaye: Review by Cupcake 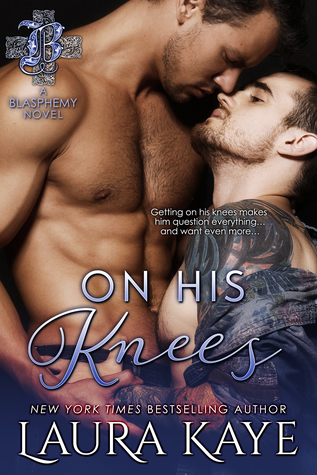 Another failed relationship has lawyer Jamie Fielding confronting the truth—he’ll never be satisfied with any woman until he admits what he needs…to submit and to be used—hard. When a friend invites him to the exclusive Blasphemy club, Jamie is stunned to find everything he ever wanted—in the fierce, ruthless hands of a man.

Psychiatrist Alex McGarry will play with anyone who craves his rough brand of domination, but what he really wants is to settle down. Which makes the submissive male he meets at his club a bad idea—the man might be hot as hell but he’s also new to everything Alex has to offer. Except that doesn’t keep them from coming together again and again, sating every one of their darkest desires.

Master Alex sets Jamie’s whole world on fire and makes him question everything—and that’s good. Because Alex won’t tolerate hiding what they have for long and he wants much more than just having Jamie on his knees…

There is one force play scene that was bad wrong in the best possible way. Many things are cursorily tried and/or mentioned kink-wise-D/s, spanking, CBT, face fucking and breath play, lite bondage and humiliation, forced orgasms with mentions of orgasm denial, electroplay and impact play-but none was very inspired or intense. There was nowhere near as much PAIN as I was hoping for from a book purportedly focused on SM.

The plot is straightforward new masochist and sub meets experienced sadist and dom who is 10 yrs his senior, their kinks align and they speed race to HEAsville. Like they were on an egg timer. Fans of instalove will be delighted by this story. I found it predictable, employing a standard romance algorithm.

You don’t want to maybe… take a breath first? I do. I need a minute. Fast forwarding through all those major life changing events not only felt unrealistic, but I felt like I was missing all the good stuff. Like development of… everything.

Sadly, this was not super successful for me but I think the cat’s out of the bag that I’m a picky bitch. There are already a multitude of glowing reviews for it so feel free to ignore me.

Recommend to fans of glitterkink, instalove and Cherise Sinclair.

A review copy was provided by the publisher.