Blank Slate by Louisa Keller: Review by Lost in a Book 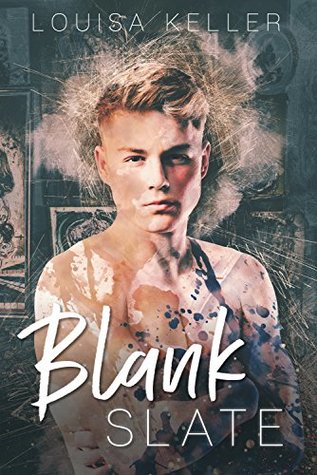 “Glad you found time in your very busy schedule to join us.”

Colby:
I only agreed to model nude for a community art class because I needed the money. I figured it would be easy-fun even. But that was before I came sprinting into the studio on the first day, late and viciously hungover, and found myself face-to-face with Axel Hawthorne. Suddenly I was stripping down in front of the very man who had blown me off after a brutally hot night on the dance floor…and letting him draw me. Hot tempered and abrasive, I knew there was more to Axel than met the eye. As the term went on I decided I was going to figure out why an award-winning artist was teaching local art classes-and why I couldn’t get his stupid, gorgeous face out of my head.

Axel:
It had been one year since a devastating incident had robbed me of my ability to paint. I was ready to live out the rest of my days in a state of abject misery…and then Colby Stevens wormed his way into my life. Passionate, self-assured, and more than a decade younger than me-I was intoxicated by him. Suddenly I was making art again, filling canvas after canvas with his body and my desire. As our working relationship segued into something more, I allowed myself to consider that he might be the key to starting fresh. But healing would be an uphill battle…would I be able to start over with a blank slate?

I really really wanted to love this one. A broken artist and an inexperienced nude life model had me jumping on this with alarming speed. I was also looking forward to this author’s next book because I really enjoyed the first novel, Fragile Ground. Unfortunately, this one didn’t work for me.

Colby is a senior in college, just finished his semester, and heads out to a club with his best friend and sometimes fuck buddy, Eleanor. At the club he stumbles upon the most beautiful man he has ever seen, Axel. Things get heated on the dance floor so they take it to the bathroom stall where he gets to see the “most picture perfect cock” he has ever had the pleasure of servicing. *yawn* Anyway, after the performance of a lifetime in that bathroom stall, Colby is treated to a chilled out prick when Axel makes it clear round two isn’t an option and neither is the bottomless bank account and white picket fence that Colby must be after.

Axel is a mercurial ass that lashes out at everyone because of the circumstances that led him to being a has-been artist. He’s “slumming” it by becoming an art instructor and believes the saying, “those who can, do and those who can’t, teach” is absolutely true.

Fast forward to the next morning when Axel’s new nude life model walks in for his first session and it turns out to be the guy who blew him the night before, Colby. This begins their “enemies to lovers” journey of finding common ground and then finding each other. Maybe?

From the beginning of the story I was bored and hoping that once the art stuff began my interest would increase. It didn’t. Colby was likable yet came across as one dimensional. All of the conversations with him and Eleanor were silly and induced major eye rolling. Axel and Colby’s connection wasn’t evident beyond the physical throughout the entire book. Yes, they said in their own minds that they had feelings for the other but that didn’t translate to their interactions. Axel remained very removed from anything beyond sex and art while Colby walked on egg shells in fear of scaring Axel away. I didn’t believe their feelings throughout and was underwhelmed at the end.

I’m not going to get spoilery but the BIG reveal was mentioned constantly. The drama from Axel’s past was referred to so much I just knew it was going to be EPIC when it finally came out…

Although I had heart eyes for the synopsis and Lousia Keller’s previous novel, this wasn’t my cuppa. I’ll give her next one a shot even if I wouldn’t recommend this one- but YMMV.

Copy provided by author in exchange for honest review.