Once upon A Wolf by Rhys Ford: Review by Lost in a Book for @BMBR 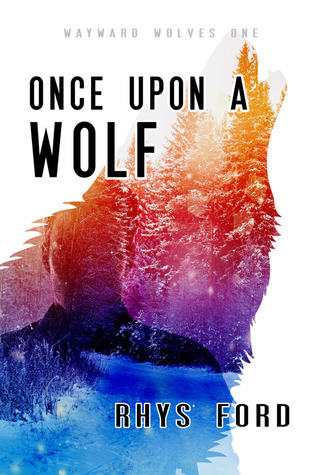 Once Upon A Time, There Was A Wolf….

Gibson Keller’s days are fairly routine: wake up early, get some work done, drink lots of coffee, and take care of Ellis, his older brother stuck in wolf form after coming home from the war. It’s a simple life made up of long runs on two legs—or four—and quiet evenings…. Until Ellis chases a handsome man off a cliff and into the frozen waters beside their cabin, changing Gibson’s life forever.

For Zach Thomas, buying an old B&B is a new start. Leaving behind his city life, he longs to find peace and quiet, and hiking the trails behind his property seems safe enough—right up to the moment an enormous black wolf chases him into a lake, nearly drowning him. Discovering werewolves are real astounds him, but not as much as the man who rescues him from the icy water then walks into Zach’s heart as if he owns it.

Loving a werewolf—loving Gibson with all his secrets—has its challenges but Zach believes their love is worth fighting for, especially since his heart knows the big bad wolf is really a prince in disguise.

I LOVE Ellis. I love his wolfish shenanigans, the mystery of his story, and how far he came throughout… the problem is that it isn’t Ellis’ story. I think?

Gibson is a wolf shifter that lives with his brother (Ellis) in a mountain cabin. One day Ellis decides to play a game of chase with an unsuspecting stranger… except the stranger is terrified and slips down the mountain. Luckily, Gibson is able to rush to the aid of the badly injured Zach.

Zach is the new neighbor that purchased a bed & breakfast and he connects with Gibson *super* fast. Well, maybe not a connection but they are attracted to each other right away… even badly injured, Zach is wanting to mount Gibson (which I would totally believe if this was a mates type shifter book). It just seems a foregone conclusion that because they are the only two men within miles, they would end up together. I get it, last man on Earth and all- but it didn’t seem authentic IMO. Unfortunately there isn’t much else to the Zach and Gibson show. The romance/connection between Gibson and Zach was put on the back burner as all focus went to Ellis. Because of this, the relationship felt forced.

As the synopsis mentioned, Ellis is stuck in his wolf form to cope with the nightmares that never leave. This book provides in-depth coverage of Ellis’ status, the growth he makes, the danger he gets in, and the care he receives from Zach and Gibson. Ellis and Zach form a special bond that I believed and a connection I felt. It’s a damn shame it wasn’t their story.

One of the things I adore about shifter stories is the possessiveness. I love the growly mine and the unapologetic need to be near the other and the ultimate desire to claim them. With this book, any time Gibson showed a hint of possessiveness, he went apologetic. *sad face* There wasn’t much heat on page and I was glad for it. Without the connection between the MCs, more sex would have just felt out of place to me.

I can’t recommend this book for the MCs but I was a fan of Ellis and if he’s getting a story, then reading this would be necessary. I’ll continue on this series *only* if Ellis gets his official story.