Closets Are for Clothes by Addison Albright: Review by Lost in a Book 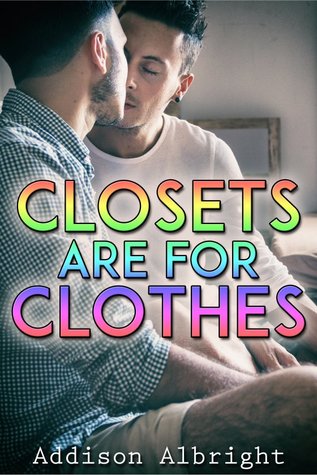 Mike’s life is carefully compartmentalized. He’s deep in the closet to his family back in Kansas, but lives life honestly and openly in Austin. He’s unnerved when Wes, his old university crush, turns up at his door in answer to a roommate advertisement, but quickly sees the potential…benefits of the arrangement. Wes has never doubted nor denied his sexuality. With the support of his family he’s an out and proud LGBT activist.

On the scale balancing his self-esteem on one side, and the love of his family on the other, Mike has to decide which weighs more. Is Mike being fair to his parents by not giving them the chance to know his real self? When the delicate balance of his life is disrupted, he decides he’s tired of living a lie. Will Wes understand his concerns, or will their fledgling relationship crumble under the strain of Mike’s uncertainty?

Closets Are for Clothes had a very promising start. I was all giddy with potential roommate possibilities. When the MCs met, there were sparks and teasing. My only questions were who would admit the mutual attraction first? And what would they do about it? Then I got bummed because it went downhill. Fast.

Mike’s on the roommate hunt searching for that perfect person to fill the extra room. He isn’t too picky but definitely wants one that’s not overly chatty or homophobic. Mike’s openly gay in Austin but he’s locked tight in the closet when it comes to his family.

Wes, medical resident and LGBT activist has moved in with Mike. He’s out, proud, and interested in his new straight?? Gay?? roommate.

The initial teasing was the highlight of the story which is dissapointing because it took place very early on. Mike and Andrew got together extremely quick and oh so awkwardly IMO.

From their initial hookup, we are in Mike’s head and trust me when I say that’s not a good place to be. The main “angst” surrounds Mike and his decision to come out with his family. That’s the entire book. The book consisted of Mike rambling in his head, arguing with himself, and going through the SAME scenarios over and over and over and…

The “angst” felt contrived. Coming out can provide enough anxiety on its own without Mike’s inability to let things go- even when they were positive. He finds a way to look for ulterior motives when the person has always been trustworthy and he can turn positive reactions into negatives all in his mind #talent.

Maybe including Wes’ POV would have broken up the mundane trip through Mike’s head and the continual repetition of his dramatic thoughts? Maybe not? Either way, this was hard to get through. It didn’t work for me but my reading experiences are my own.