Captain Merric by Rebecca Cohen: Review by Lost in a Book 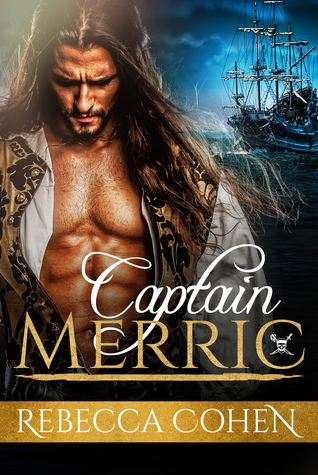 A tale of pirates, lost love, and the fight for a happy ending.

After he’s set adrift and left to die by his mutinous crew, the last person Royal Navy officer Daniel Horton expects to come to his rescue is Captain Merric. An infamous pirate, Merric is known as much for stealing his victims’ hearts as their jewels. Daniel’s world is about to be turned upside down when he recognises Captain Merric as none other than Edward Merriston, someone he thought he’d never see again.
Edward can’t believe Daniel Horton is aboard his ship. While Edward is willing to do anything he can to get a second chance at their happy ending, Daniel isn’t interested in digging up the past. But Daniel is one priceless treasure Captain Merric isn’t about to let go of without a fight.

Captain Merric first appeared as short story in a pirate-themed anthology. Now completely rewritten and extended he is ready to set sail again.

Ahoy Mateys!! I’ve been back in pirate land the past few weeks enjoying all of these upcoming/newly released pirate romances. This one continues my streak of pirate success and I enjoyed the world Rebecca Cohen created in Captain Merric.

Daniel and Edward were lovers when they were younger. At that time in England, their relationship had to be hidden or face arrest. Edward sets off to sea only never to return home. Daniel finds out about Edward’s death and continues to mourn him for the next 15 years as he climbs rank in The Royal Navy to that of Captain. Daniel’s crew sets him adrift in the ocean and leaves him to die. Luckily for Daniel, the Opal sails by and brings him on board and face to face with the man he thought dead so many years ago, Edward Captain Merric.

Right away Daniel is angry, hurt, relieved, and devastated that Merric is alive, well, and has been living the high life in the Caribbean. Merric has his own reasons for shock at seeing Daniel yet he’s so happy and wants to start where they left off with his one true love. *Silly Merric*

“As you said, what is past is past. I am no more in your future today than yesterday before I knew you were alive.”

After their reunion, each man must determine what they can and can’t live with, what they will or will not forgive and what it means for their future. I didn’t understand Captain Merric in the first half. As a pirate captain, it was clear. As a man devastated by heartbreak for 15 years, I didn’t see it. His words were contrary to his actions as he attempted to win back Daniel’s affections. Even at 80% he was expressing his absolute love and yet was extremely tempted by others? As a pirate, Merric was successful at plundering on the seas. They enjoyed their rum, finery, and warm bodies but they still had a sense of humanity in tact when encountering “the enemy.”

Daniel’s much easier to understand with his ice veins and “empty shell.” He makes Merric work for everything. He built up walls over many years and it takes a while for them to be knocked down, for him to get out of his head, and back on the trail to rational-thought land. Merric has a hard time controlling his feelings and this causes relational strife.

I believed their relationship towards the end of the book but would have liked more time with them being on the same page. I was disappointed there wasn’t an epilogue. I don’t need one for every book I read if there is decent closure at the end. This has a HEA *I think* but their options for the future were left open ended. Maybe there will be another book that provides complete closure?.? Captain Merric also had a lot of repetition going on, especially during conversations where I was internally shouting you said that already. Again.

This second chance romance was entertaining. It’s a familiar take on pirates while at the same time being completely different. Friendly pirates? Who knew. Recommended.