Astray (Wavesongs, #1) by Elvira Bell: Review by Lost in a Book for @BMBR 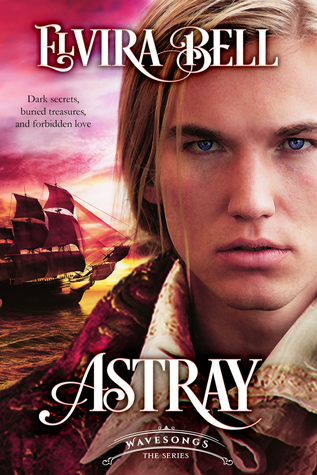 Nick Andrews has grown up in poverty in a tiny village. All his life he’s been told that he’s useless. After getting one scolding too many he decides to go far away, off to sea. But his experience as a farmhand has done little to prepare him for the hardships of a sailor’s life.

When his ship is attacked by pirates, Nick’s life is miraculously spared by the notorious pirate captain, Christopher Hart—a man in charge of a crew feared for their brutality. Nick is forced to join the pirates, and he dreads finding out for what reason the captain has saved him.

But Hart is nothing like his reputation suggests, and Nick soon finds himself entangled in a relationship that could endanger both their lives. Unless Nick can help Hart on his quest to find a long lost treasure, their forbidden love may tear his new life apart.

Warning: This book ends with a cliffhanger, and it does not have a happy ending. The series as a whole will have a HEA ending.

*Deep Breath* THIS ENDS ON A EPICALLY MASSIVE CLIFFHANGER!!

I’m not one of those readers that like can handle a cliffhanger. I’ll eventually read it but I always wait until a series is complete so I can move on to the next book. Immediately. My motto has never been patience is virtue. But you know what I’m even more peeved about besides a surprise cliffhanger??? That I actually really liked this book. I was swept away into the land of pirates and at the end it’s all…

Note: This book now contains a cliffhanger warning on Goodreads.

Alright, I’m done being whiny and dramatic so let’s do this.

Astray is set in the 1700’s and begins with Nick at home living with his family. He’s a dreamer which provides more frustration for his family as they are poor and Nick’s another mouth to feed. He leaves home in search of the same open seas his father once sailed. He quickly learns that being on a ship isn’t a place for dreamers but he can’t return home. Soon, his ship is overtaken by pirates and the Pirate Captain, Christopher Hart spares his life.

Christopher Hart is the mercurial captain of the Victory. The pirates are terrors of the sea, brutal in obtaining bounty, and they’re in search of the ultimate long lost treasure. Captain Hart has quite the reputation and Nick gets first hand knowledge of the merciless man. Christopher brings Nick to his ship where he must find his place if he wants to survive. Captain Hart begins asking Nick to complete small tasks in his cabin and over time, lines are crossed and boundaries in private become non-existent. Nick is enamored with Hart and Hart confuses Nick with his public versus private persona.

The crew is uneasy with the developing closeness of the two men and circumstances become more dangerous. Hart must prove himself to the pirates and we get to follow along on their journey full of the highest of highs and the lowest of lows.

Hart and Nick are opposites. Nick’s laid back, needy for affection, and trying to find himself. Hart is commanding yet insecure, on a quest for validation, and obsessive about Nick. I felt the connection even though their relationship was very rocky and they spent so much time apart.

The world building is thorough and drew me in. The secondary characters are endearing and entertaining. Goldie. Oh Goldie, I love him and would like his story any way I could get it. This is a dark and gritty read. They are pirates that do piratey things while living and dying by their articles.

There were some areas for improvement IMO. There are many time lapses without notation or even a line break from one sentence to the next. Sometimes these were happening in the middle of conversation or action so I’m *assuming* the scene was a fade to black? There were also times when the pacing was slow and parts dragged and on the other hand, parts where there should have been character/relationship development but it was rushed/lacking.

I enjoyed the world Astray allowed me to escape to. I’ll continue with the series but… I’ll be waiting until it’s complete before moving on to the next book. Recommended for fans of ruthless pirates and all that entails.