Femme by Marshall Thornton: Review by Lost in a Book 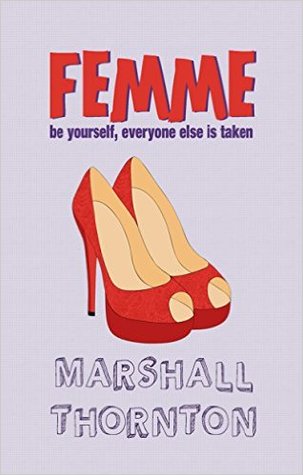 Queeny cocktail waiter, Lionel, wakes up to find himself in bed with Dog, a straight-acting softball player and the two embark on a rocky road to romance. A journey that requires coming out of the closet, going into the closet, a pair of red high heels, many pairs of red high heels, a failed intervention, a couple of aborted dates, and homemade pom-poms. Mostly, Lionel and Dog learn what it means to be a man.

I want to be BFF with Lionel. He has a brand of snark that I’m completely on board for. He’s unapologetic about who he is and can rock short shorts and heels way better than I can.

He’s sweet, sassy, and busting his ass each day to finally be safe and secure.

Dog is conflicted between what he wants and want he thinks he should/shouldn’t want. It’s clear that he wants Lionel but he just can’t seem to get himself together and make smart choices. He’s very introspective and eventually accountable for his behavior which I can appreciate… even if I wanted to strangle him a few times for his antics.

“I’m not always that quick. I mean, I kinda didn’t get what the big deal was, and if I was going to apologize for it the right way I needed time to figure it out.”

When Lionel and Dog were together, they were hot and adorable all rolled into one. Now, Dog’s family on the other hand #exasperated. I *somewhat* liked his sister in the beginning but by the end I wanted to buy stock in duct tape to permanently keep her mouth shut. His dad. *face palm* at least there’s growth all around. *shrug* Lionel’s friend Carlos is fanfuckingtastic though. He has a lot of quotable material that I thoroughly enjoyed.

“Straight people always think someone’s straight until you tell them. You could have a dick in your mouth and a butt plug up your ass, and a straight person would say, ‘Do you have a girlfriend?’”

Definitely recommended and I’m looking forward to checking out Lionel and Dog’s upcoming shenanigans since another book is being released.