Life of Bliss (Love Life #2) by Erin McLellan: Review by Lost in a Book for @BMBR 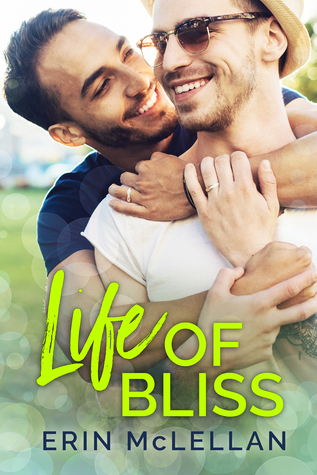 Nobody plans to accidentally marry their frenemy with benefits.

Todd McGower and Victor Consuelos do not like each other. They can’t have a conversation without insults flying, and Victor seems to get off on pushing Todd’s buttons. The fact that their antagonism always leads to explosive sex . . . well, that’s their little secret.

Victor has a secret of his own. His full-blown crush on Todd is ruining his sex life. He hasn’t looked at anyone else in months, and he’s too hung up on Todd to find a date to his cousin’s wedding.

In a moment of weakness after a heart-stopping night together, Todd agrees to be Victor’s fake boyfriend for the wedding. Victor will have his plus-one—which will get his family off his back—and Todd will get a free mini-vacation. It’s a win-win.

But pretending to be fake boyfriends leads to real intimacy, which leads to too much wine, and suddenly, Todd and Victor wake up with wedding bands and a marriage license between them. That was not their plan, but a summer of wedded bliss might just change their minds.

Victoooooooooor!!! I had a serious case of excite finding out that Victor got his story. He was the highlight for me in book one and I had to get my hands on the sassy, hilarious, and fierce dancer. He didn’t disappoint.

Todd is a piano accompanist on summer break. We were introduced to Todd in book one as Rusty’s fickle ex. Todd and Victor were always biting each others head off and all that built up frustration led to “hate” sex. Don’t get too excited, the hate sex takes place off page. *sad face* But, they have chemistry and I’m a big fan of sass, sarcasm, and sex.

Life of Bliss begins when Todd and Victor have already been hooking up for 5ish months. They were able to keep these “booty calls” a secret from their best friends with their typical antagonistic behavior, making others none the wiser. Victor has been secretly pining after Todd since they met. After their latest hookup, Victor has a moment of weakness and invites Todd to his cousin’s wedding. Wedding + hidden feelings + lots of alcohol= drunken nuptials. What happens in Vegas Arkansas clearly doesn’t stay in Arkansas. They decide to give it the summer as a married couple and at the end, Victor and Todd will make a decision on whether they get a divorce or stay married.

“Maybe they’d move so fast and fuck so often that he wouldn’t have time to screw this up?”

Todd has a lot of insecurities about his career path, financial situation, parental judgement, and inability to have a relationship. He does a bang up job of turning the doubt into a self-fulfilling prophecy and throws wrenches into their marital bliss throughout the summer.

Todd and Victor’s relational development wasn’t fully fleshed out on page, either. However, they had been hooking up many months prior to this book starting which gave us an established friendship, connection, and chemistry instead of strangers meeting. It’s also a sex heavy book which is to be expected with the status of their “relationship” prior to getting married.

I liked watching their growing pains and subtle changes as feelings progressed and deepened giving them a connection beyond sex. My favorite parts are the snarky parts though. The back and forth they have at the beginning is less frenemies and more foreplay. When they are “figuring” things out, they lost that part and I was a little bummed about it.

Life of Bliss is a low angst read with fabulous characters (😍😍Victor), syrupy sweet HEA closure- all wrapped up in a big ol’ ball of fluff. Recommended.

“I’ve liked you all along too. Even when I didn’t like you at all.”