Masc (Femme #2) by Marshall Thornton: Review by Lost in a Book for @BMBR 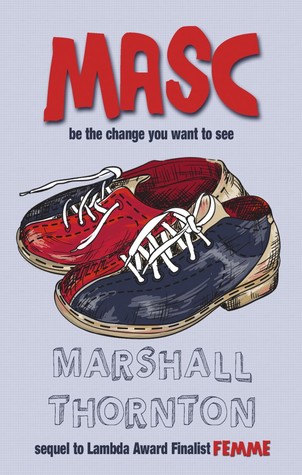 Lionel and Dog are back in this follow-up to the Lambda finalist, Femme. Almost six months have passed and, after taking an online quiz, Lionel believes their relationship is doomed because they have nothing in common. To save their future together, the pair joins a gay bowling league and discovers that Lionel is an excellent, if somewhat eccentric, bowler.

Meanwhile, Dog gets profiled in a work newsletter. He’s excited that he’s out at work, but doesn’t immediately realize that by fawning over Dog’s masculine nature the writer was also putting down all femme guys. Lionel takes it personally, which leads the to a crisis in their relationship. Attempting to make it up to Lionel, Dog makes a grand gesture—which backfires spectacularly.

Will the two manage to put things right? And will a night in jail, a morning of drag bingo, an afternoon of day drinking, and a month of moping make things better or worse?

Masc is a solid follow up to the Dog and Lionel show. It had many of the same ingredients that were present in the first:

Sassy Lionel? Check
Clueless yet introspective Dog? Yep
Dog’s crazy family? uh huh
Over analysis of how a relationship should look? In spades.
OTT moments? Is the sky blue?

Masc deals a lot with the growing pains of a new relationship and the questions that creep up after the honeymoon phase; Questions about purpose, direction, and the longevity of Lionel and Dog’s future. Lionel and Dog also have a lot of personal obstacles they have to battle before they can fully appreciate each other and the relationship they’re building. Things get shaken up when Lionel takes a relationship quiz that shows having nothing in common pretty much equates to a doomed relationship.

Unfortunately for their supposed doomed relationship, shit hits the fan even more when Dog is profiled at work. That article shines the light on biases/stereotypes/gender role issues that plague the MCs, their family, and co-workers. I’m not sure I’m all the way on board with the way Dog had to work through his issues, but I will say that I was raging for a bit during the read.

Dog and Lionel are so silly but stay true to themselves. I enjoyed it for the most part but at times I felt like I was hitting my threshold for dramatics. I was hoping that there would be more growth to the relationship but much of this book was dysfunction with a big helping of OTT. They got their HEA but the cohesiveness took a lonnnnnnnng while to obtain.

I’m not going to lie, I was a tad nervous in the beginning with Graham’s sister being on page so soon. Dog’s family drove me crazy in book one but his sister was the icing on the cray-cray cake. It’s enjoyable to *see* the growth she makes and how far his dad has come since the first book. They all grew on me and become a nice support system for Lionel and Dog.

Dramatics and OTT-ness are pretty much the M.O. for Lionel and Dog’s relationship in Femme so expect the same for this one. There are some serious issues taking place in this book with a trigger warning for sexual harassment and insinuation of past child abuse. It was nice to spend more time with Lionel and Dog. Recommended.