Julien by Ella Frank: Review by Lost in a Book 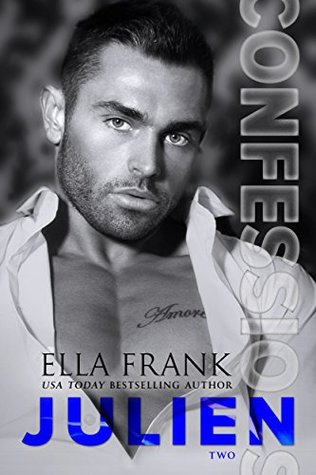 People are complex.
Love a double-edged sword.
And when it comes to a broken heart, there are no rules, only time…

For the past eight years, Julien Thornton has been living with a secret. One that only a handful of people know about.

To the outside world, he has it all.
A thriving career. A loving husband. And a face that the American public fell for by the millions, on a reality show that inadvertently saved his life.

But behind the shine of celebrity, behind the easygoing nature, a crippling truth fills Julien with pain and self-loathing. It’s a truth that he fights to overcome daily with the help of his husband, Joel Priestley, and now their boyfriend, Robbie Bianchi.

But unlike Priest, Robbie doesn’t know what he’s helping Julien to fight. He doesn’t know what Julien did all those years ago. And with the anniversary of his sister’s death fast approaching, the time for explanations is running out.

And thus the question: will the princess be able to forgive the prick as the priest once did?

Only time will tell.

**Please note this book contains sensitive situations regarding drug use.**

*Psssssttttt* I’ll tell you a secret… I’m holding out for Priest. He’s the dessert I’ve been waiting to devour. I’m not saying I haven’t enjoyed Robbie and Julien, I’m just being clear and upfront that Priest is where it’s at for me.

This story is aptly named because it goes through Julien’s mysterious history that we understand from the first story, runs very deep. Much of Julien’s POV are flashbacks either he has or stories he is telling. Robbie and Priest help Julien navigate through the emotional turmoil in their own way with Priest’s solid support and Robbie’s ray of light shining through all the darkness.

We still get all three POVs in Julien as the men continue to find their footing as a relationship of three. For me, the Julien situation is overshadowed by the connection that grew with Robbie and Priest. I’m was for that too since I love Robbie and Priest HARD! They become more comfortable as a duo outside and inside the bedroom. Lemme just say, the closet and shower scenes… 🔥🔥🔥

<b>“We are allowed to do whatever we like to whomever we like within the three of us. There’s no room or cause for jealousy. There has to be trust, honesty, and total transparency.”</b>

Robbie, Julien, and Priest are still hot together but the focus is more on deepening the connection with everyone as duos and a trio. The situation with Julien had an EPIC build-up. I was expecting something insanely unthinkable and once everything was revealed, I had a moment of “that’s it?” I’m not saying the situation as it happened wouldn’t leave scars, I just went way worse in my mind based on the reactions and emotions prior to the reveal.

Julien is an enjoyable follow-up to Robbie but didn’t quite hit the same enjoyment level as the first (which had insane levels of reading excite). I definitely recommend this book. Now, *SQUEEEEEE* it’s time for my dessert Priest.