What If It’s Us by by Becky Albertalli & Adam Silvera: Review by Lost in a Book 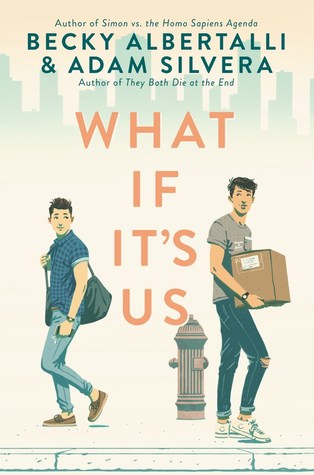 Arthur is only in New York for the summer, but if Broadway has taught him anything, it’s that the universe can deliver a showstopping romance when you least expect it.

Ben thinks the universe needs to mind its business. If the universe had his back, he wouldn’t be on his way to the post office carrying a box of his ex-boyfriend’s things.

But when Arthur and Ben meet-cute at the post office, what exactly does the universe have in store for them?

Maybe nothing. After all, they get separated.

Maybe everything. After all, they get reunited.

What if Arthur tries too hard to make it work . . . and Ben doesn’t try hard enough?

What if life really isn’t like a Broadway play?

But what if it is?

I don’t even know what the hell kind of ending that was. So warning, it’s not a HFN/HEA. I can’t explain much more than that without giving spoilers. Just know I am pissed and sad and maybe everything in between. (#Dramatic) Where TF was my warning about it not having a HFN/HEA? I don’t think every story has to have one BUT I don’t want to read the ones that don’t. *sigh* Sorry, I’m still emotionally ragey AF.

Anyway, Arthur is a 16 year old student “interning” at his mother’s law firm in New York City. He has a happenstance encounter with a cute boy while out running errands but unfortunately, they get separated before details are exchanged. What follows is a series of events using social media and missed connections as two teenagers humorously follow signs from the universe in hopes that they will be reconnected.

I love Arthur and Ben. They’re so completely different and really develop this amazing connection. Arthur is like this excited little puppy who is super extra all the time. Ben always says that Arthur has zero chill and that’s correct. His excitement is contagious and he naturally brings out the best in people while also drawing everyone together. Ben’s a bit more rough around the edges and while he usually has the best of intentions, his execution leaves much to be desired. They don’t have much time but the young love consumes them.

“It’s weird, because even I know that two weeks are nothing. So why do two weeks with Ben feel so earth-shattering?”

There were a few things I really liked about What If It’s Us:
~The anticipation- The path to reuniting had me on the edge of my seat. I was so ready for an epic moment. (Even if the moment didn’t live up to my imagination the build up definitely worked for me).
~NERDS!!!!!- The nerdiness is on a whole new level and I loved every bit. I may have added 1/2 star for all the HP references. *shrugs*
~The support system- I adored the friends surrounding the MCs. They are supportive, loving, funny, and real. Dylan. Oh Dylan, he made me giggle.
“Right. Okay. If you’re not going to speak from the dick, I think you should speak from the heart. That seems like the next logical step.”
~The parents. *dreamy sigh* Both sets of parents are amazeballs and love/support their kids as parents should.

If you’re looking for a spiced up Y/A (is that a thing?) then this isn’t for you. Everything takes place off page besides kissing. There are some jokes but nothing explicit between the main characters is written. This worked well with the story and the maturity (and age) of Arthur and Ben. The focus is more about building their connection.

Was it perfect? nope. The first half seemed a little draggy to me at times. It got to the point that I was skimming instead of reading because things were taking forever. There were some story lines that seemed random IMO.  I could *maybe* see they were added as another way to show that it’s important to accept someone as they are? Did I mention the ending?  I’m also still peeved about that. Reallllly f’n peeved.

The writers are very talented and I was invested. I loved the characters but I can’t move past where they left off. Especially when it’s unknown if a sequel will follow.

I don’t know if I’d recommend this. Maybe yes? Because Arthur and Ben are great. Maybe no, if you’re the type of reader that needs closure. YMMV. If I pretend the ending had a HEA, I could give it 4 stars.

”But Arthur? I barely know him. I guess that’s any relationship. You start with nothing and maybe end with everything.”