Rocky Mountain Refuge by Nicky James: Review by Lost in a Book 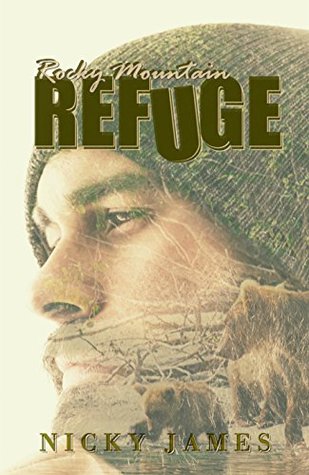 Run! Hide! We are watching you, Huxley!

Huxley Dempsy suffers from a paranoid personality disorder. After a horrific tragedy five years ago, Huxley is convinced people are out to get him. Taking refuge in the foothills of the Canadian Rockies, he is a prisoner to his own mind. If he can think it up, it must be true, and there is no convincing him otherwise.

Wildlife biologist, Aspen Taylor, is on his way north again to close up the final year of the Grizzly Bear Research Project. Studying wildlife in their natural habitat is what sings to his soul. However, who he finds in the mountains is almost as beastly as the bears he studies.

An underlying sense of familiarity draws Aspen to learn more about this Wildman, and a strong sense of attraction binds them together almost instantly. But can Aspen break through the barriers of Huxley’s mind and convince him to go home?

I devoured this insanely fast. Rocky Mountain Refuge left me hungover and scouring lists and recommendations for rustic and/or wilderness M/M reads. Not gonna lie though, this book hurt. It’s hard to read Huxley’s POV and my face might have leaked a tiny bit. However, it’s balanced with a lightness that surrounds Aspen and that makes it hurt SO good.

Huxley has struggled with paranoia since childhood. Between therapy and the amazing support system of his mom and husband Nathaniel, he was able to function throughout his day to day life. That is, until he witnessed the murder of his husband and then his paranoia got the better of him and he now lives secluded in the wilderness for fear of being found by the men who committed the crime. From the beginning of the story, Huxley’s paranoia is suffocating. It’s debilitating, full of delusional thoughts, and complete rationalization of maintaining his current lifestyle cutoff from the outside world.

Aspen is a wildlife biologist that’s working on a grizzly bear project in the middle of nowhere with only his team around… and unbeknownst to him, Huxley. He has such a calm nature and is totally at ease in the wilderness. He stumbles upon Huxley and that encounter and many that follow have Aspen approaching Huxley as if he’s a wild animal. Aspen is intrigued by Huxley and can’t help himself from creeping around his cabin.

Their relationship begins as a way to release the pent up sexual frustration and loneliness. Huxley can only give Aspen one thing and that’s an orgasm. Their smexy times are hot AF. For real. Huxley is all growly and bossy and hot and strong and huge and…

Anywhoo, Aspen is more than willing to keep coming back for those times and senses the need to go slow with a friendship and then hopefully more. The more time Aspen spends with Huxley, the clearer the paranoia becomes. Day by day, their relationship forms as they try to develop a new normal and hopefully get Huxley the help he needs while not scaring him away. Huxley’s mental illness isn’t sugar coated. It’s not swept under the rug and a magic penis doesn’t come to fix all his woes. Shit got real and their HEA is not easily earned but is definitely sweeter in the end.

Let’s talk about Nathaniel, the murdered husband. I know this book isn’t about their relationship and the story starts after the murder. BUT, the writing and portrayal of love between Nathaniel and Huxley is absolutely beautiful. Nothing is diminished and it really added more feels to the heartbreak of what Huxley survived. I’ve read many romances where the partner passes away and for some reason the living MC says “best I ever had” or “way better than before.” The author didn’t do that here and it was absolutely refreshing to know that two people shared an amazing love that tragically didn’t last and they move on. Instead of breaking down that prior relationship to prop up the current one, it’s kept on a loving pedestal and only adds to the foundation of the new one.

P.S. Just a note of warning, this book takes place in the wilderness and wilderness things take place such as skinning/killing animals for survival. Mental illness is also prevalent throughout.