Unwrapping Hank by Eli Easton: Review by Lost in a Book 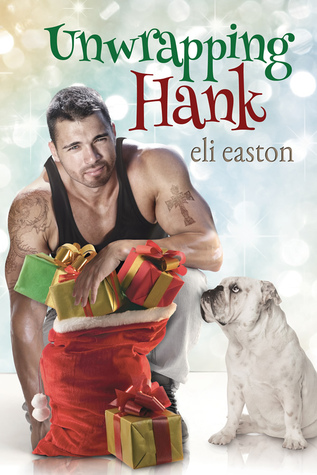 Sloane loves a good mystery. He grew up as the son of two psychiatrists, so he finds most people tediously easy to figure out. He finds his way to Pennsylvania State University, longing for a rural experience, and ends up being lured into joining a frat by Micah Springfield, the hippest guy on campus.

Nothing in Sloane’s classes is as intriguing as Hank Springfield, Micah’s brother and fellow frat house member. Hank looks like a tough guy—big muscles, tatts, and a beard—but his eyes are soft and sweet. He acts dumb, but he’s a philosophy major. He’s presumably straight, but then why does Sloane feel such crazy chemistry whenever Hank is around? And why does Hank hate Sloane so much?

When Sloane ends up stuck on campus over Christmas, Micah invites him to spend the holidays at their family farm in Amish country. It’s a chance to experience a true Americana Christmas–and further investigate the mystery that is Hank Springfield. Can Sloane unlock the secrets of this family and unwrap the heart hidden inside the beefcake?

I read a holiday book and LIKED it. No, I REALLY liked it. I don’t usually get along with holiday reads and avoid them like the plague. So thank you Eli for making my grinch heart grow a bit this year (even though this came out yearssss ago).

Oh Sloane. 😍 He’s sweet, sophisticated, well traveled, and practically grew up with a PhD in psychiatry due to his parents both having one and analyzing him on the regular. The best thing is that he isn’t pretentious about his background and he’s also not afraid to be himself and act his age. He’s attending college in Pennsylvania and joins a frat where he meets Micah and his mysterious brother, Hank. Micah loves solving mysteries and Hank, with his standoffish mercurial behavior became number one on his list.

Hank is Micah’s brother and where Micah’s a hipster, Hank is macho, tattooed, and hides his intelligence behind a dude-bro persona. Hank is crotchety where Sloane is easy going. Hank tries to avoid Sloane until he’s stuck with him at his family’s house over Christmas.

The Christmas holiday gives Sloane the perfect opportunity to fully *ahem* unwrap the mystery that is Hank Springfield.

Hank and Sloane are fabuuuuuulous and highly entertaining together. They have a snarky front that is practically foreplay even if they don’t realize it. The relationship development isn’t rushed and we get to feel all warm and fuzzy at the perfect pace as they find a way to HEA-ville. You know what else? The Christmas element was tastefully done throughout to where I didn’t feel like I was rode hard and hung up wet by Santa, the elves, and reindeers. I wish there were more pages though because I’m greedy. What’s going to happen with Micah? Does he already have a story and I just don’t know about it? I could have read another hundred pages about Sloane and Hank. *dreamy sigh*

This was such a comfort read that I may have to revisit yearly to get my dose of Christmas cheer. It provides the feel of sitting by the fire with hot chocolate, cozy blankets, and hot ass smexy times (though refreshingly, it isn’t a gratuitous sex-fest). Definitely recommended.

P.S. I forgot to mention I listened to the audio. Tristan Wright is the narrator and he did a great job bringing these personalities to life.