Oz (Finding Home, #1) by Lily Morton: Review by Lost in a Book for @BMBR 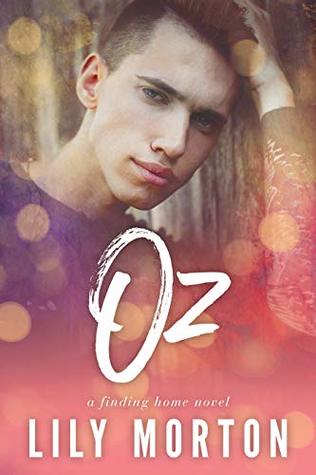 What happens when temporary becomes forever?

Oz Gallagher does not do relationships well. Bored and jobless after another disastrous hook up, he decides to leave London for a temporary job in the wilds of Cornwall. Surely managing a stately home on a country estate will be easier than navigating the detritus of his relationships at home. Six months there will alleviate a bit of his wanderlust and then he can come back to London as footloose and fancy free as the day he left it.

However, when he gets there he finds a house in danger of crumbling to the ground and a man who is completely unlike anyone he’s ever met. An earl belonging to a family whose roots go back hundreds of years, Silas is the living embodiment of duty and sacrifice. Two things that Oz has never wanted. He’s also warm and funny and he draws Oz to him like a magnet.

Oz banks on the fact that they’re from two very different worlds to stop himself falling for Silas. But what will he do when he realises that these differences are actually part of the pull to one another? Will falling in love be enough to make him stop moving at last and realise that he’s finally home?

This is the first book in the Finding Home series but it can be read as a standalone.

Keeping it 💯, I have a crush on Lily Morton with all her writery (totally a word) talents? Her books always have elements that keep me coming back for more and she has secured a spot on my automatic author list.
Humor- ✔️
Snark-✔️
Sassy character(s)-✔️
Chemistry-✔️
Great secondary characters-✔️
Depth in main characters-✔️

Oz is sick of spinning his wheels through life and after walking in on his ex bone deep inside his replacement, he moves on with the help of friends to a *highly* entertaining interview for a position to manage the estate of an Earl. Oz is a little fireball full of sass and wit with the ability to have everyone eating out of his hand. He shockingly gets the job at the estate and sets to work right away. It isn’t long before he meets Silas and the stars align, angels sing, and sound of condom wrappers being torn open fill their day dreams.

Silas is an Earl by birth but a veterinarian by choice. He’s huge, rugged, hairy, kind, and has plenty of ex-boyfriend baggage to go along with a crumbling estate. Silas is a lonely man bound by duty with a love of the land he calls home. He takes to Oz right away but neither can act on their lust filled visions because the whole employee/employer/banging the boss thing didn’t work well in the past and they’re turning over a new leaf.

”You two. It’s like watching elephants mate. Dangerous, messy, and uncomfortable, but ever so slightly sweet.”

Oz quickly begins work on the estate and his interactions are hilarious. Silas and Oz are oozing chemistry from their initial meeting and you just know when they finally kiss it’s gonna be scorching. I adore them separately and together. They compliment each other and are able to be themselves without any pretense.

”I’d thought the moment when I fell in love would be dramatic and full of noise and energy. Instead, it’s in a quiet bedroom where a soft song plays and the light dances on the man’s hair and the planes of his face as he makes me back into me. The only man who’s ever valued that person.”

There are multiple LOL moments but the revenge on his douchebag ex, the interview, and when Oz first meets the Earl (OMG 😂) are at the top. I cackled throughout with glee as Oz was kicking ass and taking names. I also want to note that Silas is the brother of Henry from Risk Taker. This can standalone but there are multiple characters that make appearances and having that background knowledge would definitely increase enjoyment IMO.

Oz and Silas’ relational evolution is pretty low angst and ends on a HEA with a bunch of heat to pave the way. I’ll definitely continue on with the series and hope Oz’s adorably snarky assistant Milo gets his turn next. Definitely recommended.

”He’s nothing like I imagined but somehow everything I should have known enough to wish for.”