The Bibliophile by Drew Marvin Frayne: Review by Lost in a Book for @BMBR 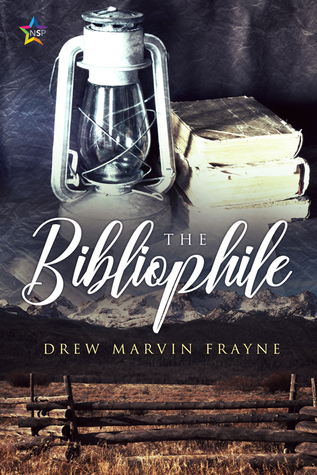 Blurb:
To toughen him up, Nathanial’s father has indentured him to a ranchman, Cayuse Jem, a large, raw-boned, taciturn man Nathanial’s father believes will help teach his son to “become a man.” Cut off from his books and the life he has always known, Nathanial is not only forced to co-exist with Cayuse Jem, but to truly get to know him. In doing so, Nathanial discovers there is more to this silent horseman than meets the eye. And, in the process, Nathanial also learns a few things about life, about human nature, and about the differences in being a man and a boy…

Well, this one snuck up on me. My love for historical romance pushed me over the edge on choosing The Bibliophile and I’m glad. It’s a unique, nineteenth century story told through journal entries for one of the main characters, Nathanial. This style might not work for some and even though I would have liked some more perspective, I enjoyed it and moved right along from entry to entry.

Nathanial has been ordered to leave his studies and take his place as the only son beside his rich father to learn the family business. He’s an academic at heart and feels the most joy spending his days surrounded by books and having intellectual discussions on anything and everything. Unfortunately, Nathanial becomes indentured as a ranch hand to toughen him up and make him “a man.” Luck is shining down on him because he’s dropped off with Cayuse Jem, a huge, burly man that is the complete opposite of his father.

Cayuse, man of very few words, is a horse trainer with a very patient and gentle hand. He doesn’t believe in bending a horse or person to his will, but to coax them gently. He uses this approach with Nathanial from the first day which builds trust and a deeply meaningful connection. Cayuse slowly built him up after Nathanial’s father and grandmother spent years tearing him down.

The Bibliophile has relatively low angst for a M/M historical romance. The angst comes from other circumstances and a devastating loss to both men. The transition from indentured servant to lover was odd. I enjoyed the entries but would have liked Cayuse’s POV. We get to know him through Nathanial’s eyes but there’s so much missing. I think having that extra insight would have helped the transition not feel so abrupt when they become lovers and smoothed some of the other areas that lacked finesse.

Overall, I really enjoyed seeing Cayuse and Nathanial ride into the sunset with their HEA. Recommended for fans of historical romance and classic literature.

P.S. I clearly missed a TON of classics while taking Lit in HS/college because Nathanial is a lover of it all, references them throughout, and left me in the dust with anything beyond Shakespeare.