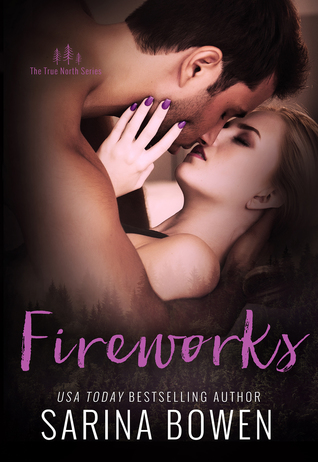 Skye Copeland is on paid leave from her broadcasting job after accidentally drawing a pecker on the traffic map.

Let that sink in. Like it’s her fault the traffic pattern that day created a perfect schlong?

Skye isn’t laughing. She needs this job. And that’s the only reason she’s agreed to chase down a story in her least favorite place—that hell on earth known as Vermont.

A quick trip. In and out. Much like – never mind. Skye can sneak into the town that once tried to break her, get the story and get back into the good graces of her producer. Easy peasy.

Except things go sideways even as she sets foot over the county line. Her step-sister is on the run from a violent drug dealer. And the cop on the case is none other than Benito Rossi, the man who broke her teenage heart.

His dark brown eyes still tear her apart. And even as she steels herself to finally tell him off after twelve years, the old fireworks are still there.

Things are about to go boom.

What I like so much about this series, plain and simple, is the Shipleys. The further removed from the Shipleys it gets, I’ve noticed my interest usually wanes. The problem is, we’re running out of Shipleys.

Bowen’s writing style is engaging and infinitely readable, as always. I mostly like Benito; he has his alphahole moments but he clearly worships the ground Skylar walks on and is upfront about it. Devotion and forthrightness are always good character traits in my book. I like Skylar. Benito and Skylar together, though, lacked the spark I’ve come to expect from Bowen. The razzle dazzle wasn’t there for me.

They have a backstory beginning when she was 16 and he 18 told in flashbacks that, for me, I found unnecessary. I’m well aware of the teenage propensity to turn molehills into mountains and that coupled with high intensity emotions can lead to disaster. But of all the people whose word you’re going to take, how in the sam hell did Jimmy Gage make the list? In twelve years it never once occurred to her to verify? And she’s a journalist?

That I found a little unbelievable which, obviously, dovetailed into the second chance trope not working well for me. The opportunity to reconcile not just with Benito but with Colebury and Zara in particular, I did like. I’m just sad that it took twelve years to transpire.

I’ve mentioned before how much I appreciate Bowen’s diligent efforts to keep the opioid epidemic and its catastrophic effects part of this series. Here we have Benito who’s in law enforcement and Skylar’s former stepsister is tangentially involved in the investigation which is what brings Skylar back to Colebury. It’s a fairly intense subplot with the nefarious Jimmy Gage as the centerpiece, but I think it overtook the romance plotline. I liked the resolution and Skylar’s role in it, though.

Colebury is as charming and cozy as ever which is part of what keeps bringing me back to this series and I always like catching up with its residents. In a nutshell, Fireworks is a nice addition to the series, but not a favorite of mine.