Thirst for You (Beyond the Cove #2) by Jaclyn Quinn: Review by Lost in a Book for @BMBR 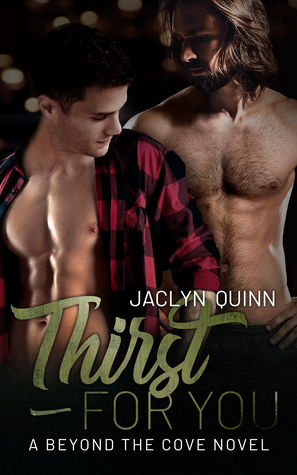 What happens when thirst becomes an obsession that can’t be quenched?

Forty-year-old Zachariah Taylor prides himself on being the overprotective older brother of seven. He owns a successful bar, Zach’s Bar and Grill, in the quiet town of Riverside Falls and loves the life he’s built for himself. But as his siblings move on and find their forever partners in life, he’s starting to feel less and less needed—not to mention old. Suddenly, he’s finding it even harder to ignore the younger man who has pursued him for years, but the twelve years separating them is something Zach can’t seem to overlook.

Twenty-eight-year-old Drew Belford has been in love with the stubborn Zach Taylor for seven years. Sure, he was a kid when they’d first met, but what Zach is determined to ignore is the man Drew has become. Drew, however, is just as strong-minded and refuses to let Zach use their age difference as an excuse to disregard the attraction burning between them. He doesn’t need an overprotective older brother—he needs Zach.

When Drew begins to get unsettling messages from an unknown person, Zach feels helpless in a way he’s never felt before. How can he protect Drew from someone he can’t find? The thought of anyone hurting Drew unleashes years’ worth of pent-up desire Zach has had for the younger man. Is his thirst for Drew enough to protect him from the danger lurking in the shadows, or will the threat of the unknown be enough to dowse the spark of love between them—and silence Drew forever?

I’m going to start off with a warning: I didn’t read the first book in the series because this can be read as a stand-alone… at 2% I was confused and feeling like I should know some things. But, I kept pushing through.

Names were dropping faster than I could pick them up and it became clear that book #1 should definitely be read (or at least go on a review binge to gain understanding) before this one. However, I’m a special snowflake and decided to ignore this and thus it took a bit to get it all sorted. Luckily, after the first 25ish% the story picked up.

Drew is an extrovert with his sights set on his brother’s best friend A.K.A his boss and owner of the bar he works at. He isn’t shy about his interest much to the annoyance (and sexual frustration) of said owner, Zach. Drew has been biding his time in getting Zach to finally notice him as more than a kid and he expedites it in the most pleasurable of ways when he gets sick of waiting.

Zach is the boss and friends with Drew’s brother and therefore places him on the do not feel/fuck list… even if it’s pure torture to work with him each day and deny those feelings. Let’s not forget the age gap- Zach is 40 and Drew is 28. The way Zach acted, you would have thought he was 80. It’s constantly mentioned and I did want to scream *get over it* many times for this measly 12 year age gap. They have good chemistry and worked well together once they got on the same page.

Things really begin to pick up for Zach and Drew when a stalker is introduced. They come together for safety and comfort during a very scary time. The stalker plot is engaging and well written. I enjoyed the family aspect going on in Riverside Falls and would be open to continuing with this series. Some of the medical stuff left me scratching my head- not in confusion but with bafflement of actual medical policy/procedure/protocol in comparison to the events detailed in this book. Trigger warnings for one instance of homophobia and a stalker.