The Reluctant Husband (Goddess-Blessed, #2) by Eliot Grayson:
Review by Lost in a Book 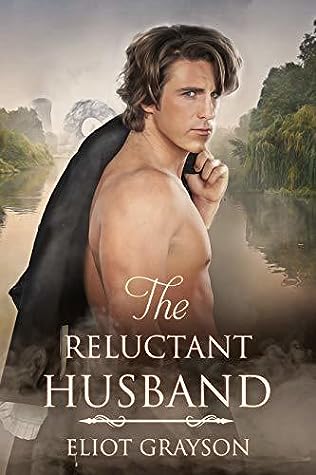 Disowned, disgraced, and with nowhere to turn, Tom Drake is willing to barter anything — even himself — for a reprieve from starvation and despair. Years spent lying to protect his secrets have left him longing for someone to value him, even if it’s only for his body and the blessing of his patron goddess.

Mal Leighton’s cousin and heir is dying. Only a miracle can save him — and if a miracle doesn’t appear, Mal’s damn well going to create one. Marrying Tom for his blessing is his last desperate hope to preserve his family. And if Tom happens to be as irresistibly seductive as he is untrustworthy? Well, Mal can focus on more than one goal at a time.

Tom doesn’t fall in love, and Mal knows better than to believe he’s the exception. But when Tom’s blessing doesn’t provide the quick cure they’d hoped, it’s clear that the goddess expects them to have a marriage in more than name. To save Mal’s family and find their own happiness, they will both need to sacrifice their pride and risk their hearts.

How the hell was my heart breaking for Tom??? Tom?? The poor, kicked out on his conniving ass VILLAN in the last book of this series, The Replacement Husband…

Somehow Tom ends up Goddess-blessed AND redeemed and now I’m converted to his side while waving my Team Tom t-shirt. Color me impressed, Eliot Grayson. Random note but as any voracious reader, I used to stay up all hours of the night to read *before* having a kid. Work the next day was tiring but I could hack it. Now, I try not to lose sleep over reading unless the book has it’s hooks in because ultimately my daughter is going to wake up at the ass crack of dawn if I stay up. BUT… I gave up sleep for this book. *gasp*

The premise for this Goddess-Blessed series is intriguing and I’m here for it. The Reluctant Husband is a historical fantasy where it’s completely acceptable for men to love men when they’re blessed by a goddess. The first book did a great job of laying down the foundation for this world while this one adds depth. It’s captivating from the very beginning when Tom and growly Mal have their initial interactions. As mentioned, Tom is blessed and Mal needs to marry someone that’s blessed for important reasons. Unfortunately, both men are stubborn and have their own hangups from the past that affect their relationship. They have a very bumpy road full of dysfunction while trying to form a complete bond that meets the goddess’ requirements.

Tom and Mal are hawt together once they can stomach being near for more than a few minutes. Slowly, Tom reveals his true self and Mal can’t help but draw near even though he’s an ass and I wanted strangle him for how he talked to and treated my oft misunderstood Tom. (Oh how far we’ve come that I’m calling him mine!!) I wanted to throw my Kindle a couple times throughout though. Tom stands his ground for a bit but gives in wayyyyyyyyy too fast for my liking at the end. They get their HEA but I wanted Mal to grovel and show his remorse. *sigh*

Anywho, Grayson’s writing and storytelling has always been enjoyable but both have come a long way since the debut novel. I will absolutely continue to devour any other books in this series. Recommended.