How to Run With the Wolves by Eli Easton: Review by Lost in a Book 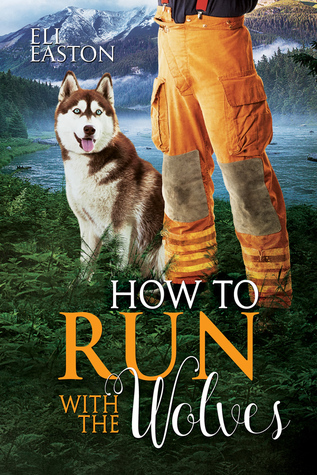 Zeus loves his job on the new Mad Creek Search & Rescue team, and his inner Saint Bernard is finally being used to his full potential. When he sees a mysterious and wild-looking quickened—a dog shifter—at an earthquake site in Alaska, Zeus is compelled to investigate. Zeus falls hard for the primal beauty of Timo and of Alaska itself. Both call to his deep canine soul. But the Quimmiq pack’s laws are as harsh as the Alaskan winters, and Timo is out of his reach.

Timo’s pack of dog shifters left their Inuit village generations ago and have lived wild ever since. Not trusting the “one-skinned,” and with their numbers dwindling, the Quimmiq are on the verge of extinction. Timo is shocked to discover a whole group of “two-skinned” working as a rescue team, and he is particularly fascinated by Zeus, a gentle giant. He senses what Zeus feels for him… but it’s forbidden.

Can Mad Creek save this lost quickened clan? Perhaps—if they can learn how to run with the wolves.

I’ve gotta say that I adored being back in Mad Creek for some friendly dog shifter living. All the old favorites make their appearances while the “main” romance is between Zeus and Timo.

Zeus is a Mad Creek native that moved for a bit and then found his way back… except that it’s too crowded. Luckily he gets on the search and rescue team for Mad Creek and ships out when needed to find trapped people or animals. Zeus finds himself in Alaska after an earthquake to help find missing people and this is where he meets Timo. The majority of this story plays out in Alaska while Timo and Zeus become friends and eventually something more. Zeus is at peace in Alaska with the openness and Timo wants to keep him in his pack- not only because he wants something that’s his but he hopes that Zeus has answers that will help his pack survive.

The relationship between Zeus and Timo isn’t front and center. They have a slowwwwwwwwwww realization about what pulls them together but become closer by the end for a HEA. The main focus of the story is about Alaska and Timo’s pack, the Quimmig and not the romance and relationship building. Easton makes note that there will be a spin-off series with the characters introduced as part of the Quimmig pack.

How to Run With the Wolves ends more abruptly than I like and I absolutely wanted more of them together at the end because it took *so* flippin’ long for Zeus and Timo’s epiphany to actually happen.

I love Mad Creek and all the people in it. I also like the idea of an Alaska spin-off and will definitely continue on the Easton Shifter Train. Recommended.