The Doctor’s Orders by Heidi Cullinan: Buddy Read & Buddy Review by Lost in a Book and Adam for @BMBR 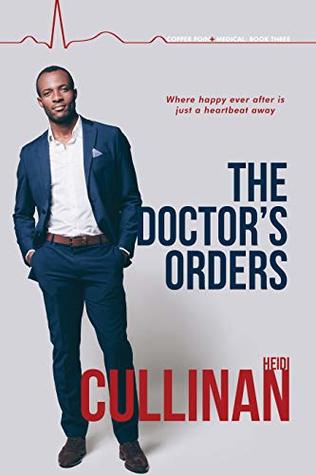 Once upon a time Nicolas Beckert was the boy who stole kisses from Jared Kumpel beneath the bleachers, but now Jared’s a pediatrician and Nick is the hospital CEO who won’t glance his way. Everything changes, however, when they’re stranded alone in a hospital elevator. Ten years of cold shoulders melt away in five hours of close contact, and old passions rekindle into hot flames.

Once out of the elevator, Jared has no intention of letting Nick get away. It’s clear he’s desperate for someone to give him space to let go of the reins, and Jared is happy to oblige. But Jared wants Nick as a lover in a full, open relationship, which is a step further than Nick is willing to go. They’ve traded kisses under the bleachers for liaisons in the boardroom… and it looks like the same arguments that drove them apart in high school might do the same thing now.

Jared’s determined not to let that happen this time around. He won’t order Nick from his shell—he’ll listen to what his friend says he needs to feel safe. Maybe this time he can prescribe his lover a happy ever after.

Wow! The Doctor’s Orders is quite the interesting read but luckily we (Adam and Lost) didn’t endure the ride alone. So, sit back, buckle up and prepare yourselves for a joint review *gasp* from us, Adam and Lost in a Book.

With this installment being the third in Cullinan’s Copper Point Medical series, we are thrust back to St. Ann’s with the CEO, Nicholas Beckert and the pediatrician everyone loves, Jared Kumpel. What once was a high school romance between these two men turned ice cold with Nick not wanting to come out and Jared not accepting anything less.

Many years go by and they find themselves in the same hospital, lonely, hurt, and quietly longing for each other from afar. Until the elevator breaks…

It’s all quite dramatic. The elevator dangled precariously from the third floor, but given the uproar and health resulting health scares, you would think it was a twenty-story drop, at the least.

What follows the elevator incident is a rollercoaster of will they or won’t they, what will the townspeople think, shitty parents doing shitty things, a whole host of social ills, and *drum roll please* ‘is the killer inside the house?!’ (or the hospital, as it were). It was a lot.

Heidi Cullinan has a penchant for dramatic flair, which ordinarily can be quite entertaining. In this case, it quickly became too much. This time around, the plot was everything and the kitchen sink.

Inevitably, we found ourselves skimming to get to the point.

Jared and Nicholas are endearing in their own ways and even likable together at some points throughout. However, that gets lost in the soap opera shuffle that is rampant throughout The Doctor’s Orders.

Both men go through a lot, particularly with their families. Plus, being gay men, and one of them black, in a small town comes with specific challenges. It’ll make you indignant on their behalf, and root for the two to come out on the other side happy.

But neither of us really connected to Nicholas and Jared in book #3. It was good to see them finally get their happy ending, but it wasn’t particularly memorable and by that point we were no longer invested in the story.

Of course, your mileage may vary!