Moonlighter (The Company, #1) by Sarina Bowen: Review by Cupcake 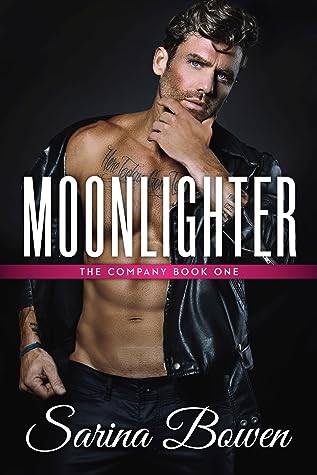 Only in my family could a professional hockey player earning seven million dollars a year be considered a slacker.

I’m at the height of my athletic career. Yet my arrogant brother is always trying to recruit me into the family business: a global security company so secretive that I don’t even know its name.

Pass, thanks. I don’t need a summer job.

But the jerk ambushes me with a damsel in distress. That damsel is Alex, the competitive, sassy girl I knew when we were kids. Now she’s a drop-dead gorgeous woman in deep trouble.

So guess who’s on a flight to Hawaii?

It’s going to be a long week in paradise. My job is keeping Alex safe, while her job is torturing me with her tiny bikinis. Or maybe we’re torturing each other. It’s all snark and flirting until the threat against Alex gets serious. And this jock must become her major league protector.

Moonlighter is a stand-alone novel. No cliffhangers, no prior experience necessary. Contains: hackers, hockey players, and a hotel room with only one bed.

Another SB winner with this spinoff of the much beloved Brooklyn Bruisers line!

Moonlighter features Eric Bayer who many remember and cooed over in Overnight Sensation or maybe that was just me? I was chomping at the bit for Eric to get his own HEA and SB did not disappoint.

I admit I made a face when I realized who the female protagonist was given her previous asshattery towards Becca but she grovels. Groveling goes a long way with me. She’s a smart, sassy and financially independent executive of a cable company that’s looking to launch an AI butler that faithfully safeguards the privacy of its owner who is pregnant by an abusive ex and needs body guarding for a conference that he too will be attending.

Eric is cocky, immodest, charismatic, can bring the snark and is especially bossy in the bedroom. He’s not looking for forever but his brother (who I also totally dig) sets him up in a fake boyfriend/bodyguard situation in Hawaii with his childhood friend, Alex Engels, and those hit it and quit it days of Eric’s are on an egg timer. Acting like a jealous boyfriend quickly morphs into actual boyfriending and it was a pleasure to witness. I liked him SO MUCH!

Maybe Alex’s denial of her feelings and/or disbelief in the sincerity of Eric’s feelings for her dragged out longer than I would’ve liked but they clearly have chemistry as well as a connection. They have fun together. The like each other and have a good balance of similarities and differences that made things realistic between them. Eric is amazingly sweet and supportive not to mention forthright about his feelings once he realizes what Alex has become to him.

The sex was pretty sensational especially the fact that Eric still desired Alex when she was “whale” (her words) sized in her third trimester.

That the privacy issue is a central theme, as dry as that seems, was anything but. I was riveted by the scenarios some of which dovetail into high-octane action sequences that I was not mad about. I love a good action scene and though I was bummed that a big part of this storyline was left dangling I was buoyed by the endnotes that said to look forward to more from The Company. Duff, Max and Scout all intrigue me, the latter of which reminded me a whole lot of Lisbeth from the Dragon Tattoo series so I’m genuinely excited to see how the series evolves.

If you’re a fan of friends to lovers romance with a side of action and a dabble of comedy then give Moonlighter a try.

An ARC was provided in exchange for an honest review.