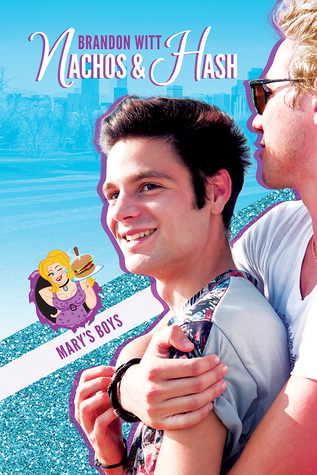 I started out listening to the audio on this book and had to call time of death at 40%. I literally listened to the first 10% and then had to stop, go back and read it because the voices were driving me crazy which ruined my focus. *smh* Along with the errors of repetition and lack of connection with the overall narration, I couldn’t go on. I didn’t feel it would be fair to judge the book based on the audio version so I bought the ebook and sallied forth to give it a fair shot. It was just okay. Maybe I should have gone back and reread the whole thing in print. *shrug* Ain’t nobody got time for that. So here it is, a 40% audio and 47% print review (40 + 47= 87% so color me confused when the book just ends as I turn the page at 87% thinking there has to be more).

Darwin is a 24 year old cancer researcher living in Denver on a grant. He’s a serial dater and ready to call it quits until he sets eyes on Cody, his waiter at Hamburger Mary’s.

Cody, like Darwin is from a small midwest town and came to Denver to be around people like him. He had never knowingly met a gay person until he left home. His father is an abusive alcoholic and his parents would never accept him as he is. Cody struggles with low confidence, self-worth, and is always waiting for the other shoe to drop. Cody has this mentality that good things don’t happen to him and if they do, they won’t last.

Darwin and Cody have a SUPER fast connection. Cody hasn’t been shown tenderness in his life or his hook-ups and doesn’t know how to expect anything different. Darwin is patient, understanding, and calls Cody on his self-hate talk. He shows Cody what it looks like to be treated with respect. They had a balance of patient and affirming Darwin for insecure and skeptical Cody.

This book was sweet. Really freaking sweet and that isn’t typically my cuppa. I’m just not a fan of insta-loveish relationships or cheesy professions of feelings when its been a couple of weeks(unless it’s a mates situation). Another thing that drove me bonkers was how insecure Cody is. Darwin is constantly having to restate his feelings alllllllll the way to the end. I know having a rough upbringing can wear a person down but Cody is an immature 21 year old. Their relationship angst was weaksauce and probably could have been skipped over since there was other drama/serious situations coming along.

Clearly it wasn’t a love match between me and this book. It started off on the wrong foot with the audio and never quite recovered. I’m not sure my opinion would have fully changed had I read it outright from the beginning, but I tried. Oh well, Cody and Darwin got their happily ever after and I’ve learned once again to LISTEN TO THE AUDIO SAMPLE BEFORE REQUESTING. *deep breath*

P.S. There needs to be a trigger warning for attempted suicide.