Love Me Louder by Christina Lee: Review by Lost in a Book for @BMBR 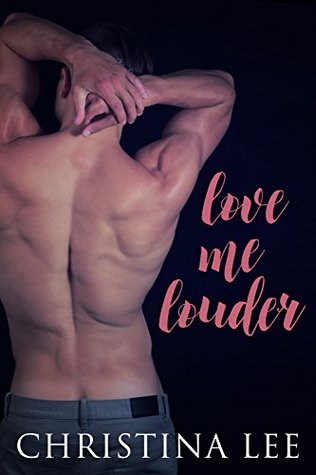 Noah Dixon is damaged goods. After an accident leaves him physically scarred and emotionally vulnerable, dating isn’t in the cards, so he throws himself head-first into his retail job. When he’s obligated to attend his best friend’s engagement party on Fire Island, it dawns on him he’s about to spend yet another weekend feeling totally invisible and alone among a swarm of gorgeous men.

That’s when the idea of an escort comes in.

After Will Crossen was forced to put his theater major on hold in favor of two jobs to tackle his ailing mother’s hospital bills, he tells himself becoming an escort isn’t that big of a deal. It’s just another form of acting, right? He doesn’t expect his newest customer to be the cheery, overconfident sales associate he avoids like the plague at his day job. Talk about awkward.

But what happens on Fire Island stays on Fire Island…especially when a smoldering attraction sparks into flames. Will doesn’t feel so alone anymore, and for the first time, Noah realizes someone is seeing him behind all the scars. But between their jobs, Will’s massive familial responsibilities, and Noah’s vulnerabilities, they don’t stand a chance unless they find a way to let love speak louder than their demons.

I’m in the minority with my rating but the fishnets, the way Will rocked them, and how much Noah got off on them brought out my happy face.

Noah works at a home furnishings store with the quiet and stand-offish Will. Noah is happiest at work where he is able to transform spaces for customers. In his private life he’s lonely, insecure about his scars, and distancing himself from the friends and family that love him. This distance from his helicopter parents and physically “beautiful” friends works until he has to go back to Fire Island for a birthday party and secret engagement for his friends. Unable to stomach a trip back alone with everyone hooking up except him, he spots a bat signal in the form of a card his co-worker Will accidentally drops.

Will works multiple jobs to help support his mother and her medical bills. He meets up with his next client to prepare for a weekend away at a coffee shop and is taken aback to find Noah waiting. After a rocky start, Will agrees to escort Noah for the Fire Island trip.

Will and Noah’s agreement begins a tentative friendship where they spend time getting to know each other. They definitely can’t show up for the weekend acting like they’ve never spent a minute together. Outside of work, they realize they have things in common and that their assumptions about the other were way off base. A connection is made and then at Fire Island their chemistry comes alive. Except, they don’t know what’s real and what isn’t. Noah doesn’t understand how anyone can be attracted to him beyond a hook-up and believes that Will is just doing what he is paid to do; which is to act like he’s a devoted boyfriend. Will can’t see past his need for money and what that means in caring for his mom. There are some mild curve balls thrown in to make decisions more complicated but low to medium angst overall with a HEA.

The first 50-60% of the book dragged for me. I wasn’t even sure I would hit 3 stars for a rating because I wasn’t having a very enjoyable time. The insecurities and self-doubt were understandable but Noah grated on my patience. Assumptions in high quantities were being spewed on both sides. The back and forth does he/doesn’t he or he’s only interested because I’m paying him drove me cray-cray after a while. I was extremely relieved that everything picked up and my sanity/enjoyment was restored as I finished out the story. Clearly this is a case of “it’s not you, it’s me.”

A warning for readers that like their MCs to only have *ahem* interactions between themselves: There are other… escorty type situations while Noah and Will find their place together. They’re minor but bills gotta be paid and all. *shrugs*

”Show me, fuck me, hire me again just so we can pretend to pretend.”