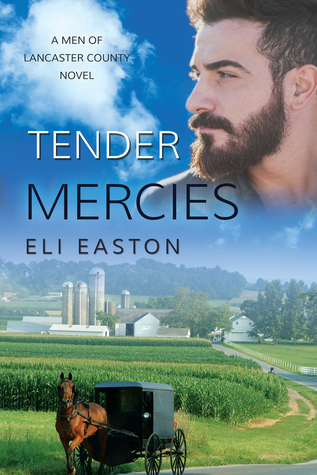 I could totally get on board with the no electricity, horse and carriage lifestyle the Amish are rockin’ if it meant I’d get a Samuel.

Well, minus the hate they’re peddling out to their own if they show any man on man interest. I just wanted still want to smother Samuel with hugs. The opening scene with Samuel tore my heart into pieces and I’m not sure I’ve recovered. The day dreams he has just to get through each day…

Samuel is an 18 year old Amish man that worked on his parent’s farm until his father whips and shuns him for being gay. He is sent away with the clothes on his back from the only life he has ever known. Samuel is devastated with the loss and is even more heartsick over his father’s parting words. He is smart though and quickly secures a farm hand position at Meadow Lake Farm with Eddie as his boss. I absolutely LOVED Samuel. He was shy, sweet, hard working, lacked confidence, needed love, craved acceptance, and had a quiet strength about him that won me over within the first couple of sentences.

Eddie is a New York transplant that has big dreams of owning a farm animal sanctuary. With zero knowledge on how to run a farm but a huge heart for saving animals, Eddie hires Samuel to run the farm. Eddie was more standoffish due to his ex’s cut and run right before they moved to the farm. He carries the weight of the world on his shoulders when there are others, especially Samuel that would love to share the burden.

Samuel and Eddie have a very slow start to their relationship. With Samuel being shy and so desperate for a job that he is afraid to make the wrong move and Eddie closed off and hiding behind his “boss” role, they take a while to get there. Once they finally form a friendship through card games and books, they have a hard time denying the attraction and all consuming need for each other. I appreciated the relationship development. With both of their backgrounds, the journey to each other was authentic and meant that much more when the walls came down.

The farm was up and running with a minimal amount of animals. They were finally together and all was looking bright as the sun…until the dark clouds of needing money rolled in. A point of frustration for Samuel and myself was Eddie’s inability to ask for help until it was almost too late. It suited Eddie’s personality but it seemed to take forever for him to see Samuel as his equal and to share the status of the farm. After they get together, their relationship is no longer a focus on page due to the issues on the farm. I get it. It’s about a farm sanctuary. BUT… in my defense, the build up to them getting together was so sweet and sexy that I wanted more. I wanted a united front, a focus on their relationship, AND some detailed time in the sheets…or anywhere else, I’m not picky. But, I do wish the farm shared the spotlight in the second half instead of overtaking the story because some parts dragged a teeny tiny bit for my taste; Even if the animals were adorbs.

For those that are curious, David and Christie from the first book have a short cameo in this one but this is a complete standalone. I’m looking forward to the next book in the series and wouldn’t mind a possible love match with the cheeky Devin and Amish Matthew. What? Too much to ask? Gotta dream big and all that jazz. Definitely recommended.