The Werewolf’s Fae Mate by Liv Rider: Review by Lost in a Book for @BMBR. 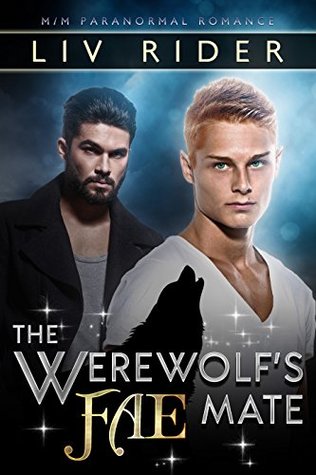 He never expected his mate to be fae. Now he has to choose between his heart and his pack.

When mixed-blood werewolf Mahon comes across powerful fae magic in a nightclub, dealing with the threat is a chance to prove to his new pack where his loyalties lie. But the threat turns out to be a gorgeous, wide-eyed college student who’s never heard of the supernatural world. After they’re attacked by bloodsucking vampire bats, he takes Oscar and his small, angry cat home for their own protection. He’ll definitely tell his pack about Oscar…later.

Abandoned as an infant, Oscar’s always wondered where he came from—he just never expected the answer to include pointy ears, magical powers, and evil forces trying to kill him. Oscar knows he shouldn’t rely on Mahon for help, but it’s hard to resist when a six-foot-six werewolf literally sweeps you off your feet. The key to Oscar’s past might lie with the local fae court—where werewolves aren’t welcome.

Oscar and Mahon are mates—but how can they be together when it might cost them both everything?

The Werewolf’s Fae Mate is an m/m paranormal werewolf/fae romance with a HEA and no cliffhangers.

The Werewolf’s Fae Mate is a short, straight forward paranormal read with heat and action.

As the blurb states, Oscar is a normal college student, until he realizes he’s anything but a normal college student. Unfortunately for Oscar, that realization happens right around the time a vampire and vampire bats come calling. Luckily for him, Mahon (a werewolf) also comes calling and Oscar is thrust into a world that he once believed was only in storybooks.

With the danger lurking around Oscar, he ends up staying with Mahon as they try to figure out the specifics about his missing past. One thing leads to another quickly and it’s all growly, mine, mates, sex, thinking about sex, and more sex. Oscar is clueless, goofy, and endearing. I wish we had more of his personality without being clouded by lust and overshadowed by the main drama of miscommunication. There is insta-love as usual in a mates situation and they ride that train all the way to an HEA.

While Mahon and Oscar are cute together, the relationship and world building is lacking IMO. I liked the premise and the characters but everything felt so rushed. Oscar has a cat named Marshmallow and I didn’t understand why there was so much emphasis placed on her. I kept waiting for *something* to happen. It didn’t. Still, I’ll definitely keep Marshmallow on the table for my future pet’s name.

If you’re new to m/m paranormal, this could be a good starting point for you. Hopefully the world building comes together in the next book. I’ll give Aidan (Mahon’s brother) a shot if he gets a book. Recommended if you’re looking for a quick and easy paranormal.