You. Forever. Always. by K.A. Merikan: Review by Lost in a Book for @BMBR 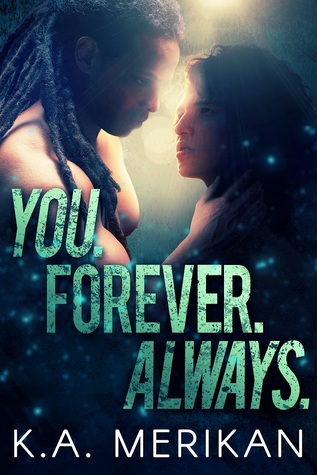 —Years of loving in secret. Now the secret’s out.—

Mage has always been Dawn’s hero. He’s been there for him when Dawn was bullied, when Dawn came out, and when he joined The Underdogs. He’s also been Dawn’s first and only love—painfully unrequited, since Mage is straight. But that’s only for the better, because they’re bandmates, and Dawn’s brother is Mage’s best friend.

It would all be too intense, too complicated, too real.

But then one drunken kiss proves Mage might not be as straight as he seemed, and their whole world turns upside down. Even though Dawn craves Mage’s love so much his heart could burst, his shyness stands in the way of any future they could share.

While they have to keep their budding relationship under wraps and they prepare to sign a major record deal, Dawn’s anxiety gets out of control. Mage will have to choose between the success he’s always craved and the love of his life.

Hmmm… I’m not sure why I thought this was my first Merikan read but it wasn’t. However, it’s worlds different than Laurent and the Beast which is my only other read by this duo. This was sweet, really sweet and while I know I’m not one to gravitate to fluff, this one didn’t hold my attention. At all. So, I’ll just move on over to my dissenting-opinion-table for one and get this lonely party started.

Dawn has been in love with his brother’s best friend (Mage) and now they’re both adults playing in the same band, The Underdogs. Mage, being older than Dawn has always looked out for him starting from a young age. When Mage saved him from bullies, Dawn’s kid heart fell in love and hero worship began. As both grew older, their bond strengthens and they become inseparable.

Dawn has anxiety, is very sensitive, and comes off as super fragile. Mage is here for it though and has been and continues to be his protector. Dawn feels everything- too much of everything. It doesn’t help that he’s in love and that it’s supposedly unrequited. Until, it isn’t.

See? Mage is soooooo sweet. But, something is missing. There are time lapses that skip over parts I actually wanted to read. How did Dawn and Mage go from a panic attack while kissing to making out and curled in bed together? Tour dates are mentioned without much detail and somehow they go from roughing it at the beginning of their tour to nice hotels? There’s not a lot of sex which is totally fine because it fits Dawn. However, many of the moments where they were apparently deepening their connection happens off page and then mentioned after the fact.

I haven’t read any others in this series and maybe that was a mistake as they could have potentially filled in some of the holes? Maybe not? IMO, not much happened in You. Forever. Always. that will entice me to read the others. It was just okay and not a ride that I will continue. As always, while I won’t recommend it, YMMV.

Sid. Drummer for The Underdogs. Secretly yearning for pain and submission.

Asher. AKA Stan. Stalker. More than meets the eye.
It’s hard to find good hookups while on tour. Sid wants pain, humiliation, and the kind of sex that isn’t easy to get from one-night stands. So for now, he’s given up, settled for an online Dom to get his rocks off, and focused on his band instead. The Underdogs are getting increasingly popular, but there is one fan who has followed Sid since before he even joined the band, and he’s driving Sid mad! Rich, spoiled hipster brat looking for the bad boy experience. If he knew what Sid was really into, he would run for the hills.

Asher is convinced that Sid is The One, his One True Love, his endgame. Years ago, Asher lost his virginity to Sid, and from that moment on, he knew it was meant to be. They had a spark, that honest connection that couldn’t be faked. The members of Sid’s band call him a stalker, but all he wants is to offer Sid his love. When Sid finally chokes out what he wants, Asher is more than ready to unleash it on him.

But the last time Sid was out as gay and submissive, he got badly burnt when his former band kicked him out, and the doors to many opportunities slammed in his face.

Asher wants the whole world to know that he’s dating Sid. Problem is, Sid would much rather keep the relationship as pain-with-benefits.

K. A. Merikan is the pen name for Kat and Agnes Merikan, a team of writers, who are taken for sisters with surprising regularity. Kat’s the mean sergeant and survival specialist of the duo, never hesitating to kick Agnes’s ass when she’s slacking off. Her memory works like an easy-access catalogue, which allows her to keep up with both book details and social media. Also works as the emergency GPS. Agnes is the Merikan nitpicker, usually found busy with formatting and research. Her attention tends to be scattered, and despite pushing thirty, she needs to apply makeup to buy alcohol. Self-proclaimed queen of the roads.

They love the weird and wonderful, stepping out of the box, and bending stereotypes both in life and books. When you pick up a Merikan book, there’s one thing you can be sure of – it will be full of surprises.