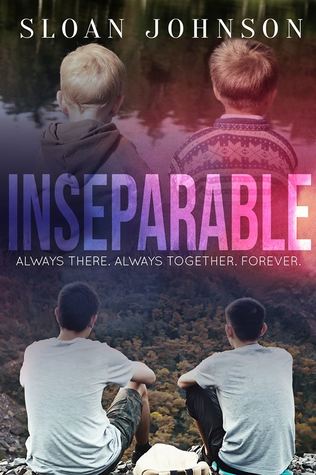 This was a sweet college romance that brought about a bit of nostalgia. Do you remember the feelings you had (or currently have) when you couldn’t wait to leave home for college (or any other reason)? That when you went away, you could finally be yourself, find yourself, and find your tribe? That’s what Inseparable reminded me of; Those feelings of hope that everything would be epic and smooth sailing once you were an “adult”.

They aren’t at the point where they realize adulting is overrated.

Anywhooo, Gabe and Trevor have been best friends since the crib. Seriously. Their moms are best friends and were pregnant at the same time. They lived two houses from each other and did everything together from playing childhood games all the way to an eventual attraction once puberty hit. Gabe and Trevor started secretly dating their junior year of high school and decided they would wait until college to make everything official. Trevor was still in the closet and both boys were terrified of how their families would react to them being together.

The day had come and they were all moved into their dorm. Freeeeeedom. They found relief in the privacy of their dorm room as they explored new aspects of being in a relationship. I loved the way Gabe loves Trevor. Trevor gets to see a part of Gabe that’s only for him. His typical abrasiveness is replaced with vulnerability, affections, and openly showing Trevor love.

Outside of their room, they struggled with the course load, making time for each other, insecurities, coming out, and family issues.

The family mom issues were insane.

Their moms, especially Trevor’s were wayyyyyyyy beyond helicopter parenting. If she could have found a way to reattach the cord, she probably would. Most of the drama in the book was caused by fear of parental (mom) expectations with coming out and/or admitting that they were in a relationship. I didn’t get it. Why did it matter that they were together? Just when I was about to hit my WTF is the big deal moment, clarity was provided the last quarter of the book and the worry *kind of* made sense.

We’re also provided a helping of relational angst with insecurities, lack of communication, and the burden of hiding their relationship. They soon realize not everything about adulting is amazing and have to navigate through the muck and mire to reach the other side. They get their HEA and find *their* people. I ended up enjoying the families (minus Trevor’s mom because drama) and really liked the secondary characters they met at college.

I read the ARC version so I’m hoping this went through another round of edits. Seth (secondary character) was called Alan a couple times at the end. I don’t hold that or spelling/grammar against the rating for ARCs. The time lapses though… *smh.* They were random throughout and a few times skipped parts that should have been on page based on the build up.

It wasn’t love, but I liked it. The characters were relatable and the leaving home nostalgia this story provided kept me coming back for more. I’d recommend it and would read Seth’s story if he gets one.

Welcome to the (Un)Masked Blog Tour with Anyta Sunday, Andy Gallo & A Novel Take PR. Check out the re-release of (Un)Masked, an intriguing paranormal romance and see below for excerpts, review, and more.  Also, scroll down to see how to enter in the giveaway for a chance to win 3 e-copies of any backlist book by either Anyta Sunday or Andy Gallo.

“What made the book for me? One word: Gristle.

Gristle, the straight boy, Jay’s best friend, his “bro,” is one of the best characters I’ve had the joy to read this year. His devotion to Jay is breathtaking, his snark so very snappy […]. Read this book if nothing for the character of Gristle. […] Spectacular.”

–T.J. Klune, Author of For Real, Bear, Otter, and the Kid, and Lightning-Struck Heart 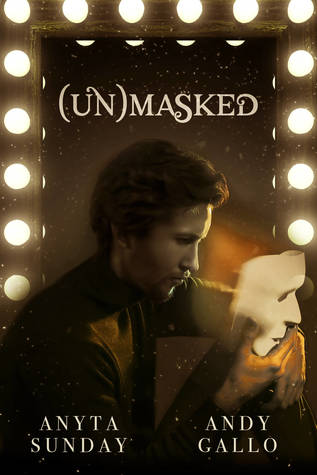 Walker has two wishes: to perform the play of his dreams alongside his best friend at Wellington’s Tory Street Theatre, and to meet that special someone. Someone he’d go to the ends of the earth for. Someone who might only exist in fairy tales.

When Jay meets accordion busker Lethe Cross, it’s like living a dream come true. Lethe’s music captivates Jay, and he resolves to meet the man who plays so beautifully. But then he discovers Lethe’s life is more like a nightmare. The phrase “down on his luck” can’t begin to cover it. Determined to help, Jay does some snooping for answers—and winds up on the wrong end of a centuries-old curse. The good news is there’s a way to break it. The bad news is it might cost Jay his life.

This book was previously published by Dreamspinner Press. This updated 2nd edition has some rewritten parts and has been line edited again.

His music sailed over me, beautiful, seductive; the call of a siren—and I went willingly.

He stood on a concrete wall dividing the beach and pavement, cutting notes into a thousand beautiful fragments that the air caught and whipped around me.

His hips twisted and his fingers slid over the accordion keyboard as he commanded the bellows.  Like magic, the disappointment that had clung to me all morning dulled, and I sank against a pylon across and watched him. Watched, and wished the lip of the hoodie he wore would lift so I could see his face.

He swayed with the music, and I glimpsed blond hair and a scar splitting one brow.

Nearer and nearer, I inched, until I stood before him.

His song ended abruptly, and he stared down at me with haunted, tired eyes.

I opened my mouth to ask him to play again, to tell him he was truly talented, but he jumped onto the beach and fled.

My soul prickled, and I knew I would never be the same again.

One never was, when death lurked nearby.

Anyta Sunday is a big, BIG fan of slow-burn romances. She loves to read and write stories with characters who slowly fall in love.

Some of her favorite tropes to read and write are: Enemies to Lovers, Friends to Lovers, Clueless Guys, Bisexual, Pansexual, Demisexual, Oblivious MCs, Everyone (Else) Can See It, Slow Burn, Love Has No Boundaries.

Anyta writes a variety of stories, Contemporary MM Romances with a good dollop of angst, Contemporary lighthearted MM Romances, and even a splash of fantasy. Her books have been translated into German, Italian and French.

Member of Romance Writers of America.

Andy Gallo’s stories capture how he wished he’d spent his formative years, instead of how it really happened. Unfortunately for his characters, they find themselves infused with some of Andy’s less noble qualities.

A hopeless romantic, Andy writes seated next to a hundred year old Smith Brothers typewriter he inherited from his grandfather. He also dreams of superheroes and wizards and sees no reason why two men with superpowers can’t fall in love just like everyone else. Although not all of his stories have a paranormal bent, a touch of the supernatural never derailed a good read in his mind.

Married and living his happy ever after, Andy helps others find their happy endings in the pages of his stories. He and his husband of more than twenty years spend their days rubbing elbows with other parents as they raise their daughter. Embracing his status as the gay dad, Andy sometimes has to remind others that one does want a hint of color even when chasing after their child.

Giveaway: 3 e-copies of any backlist book by either Anyta Sunday or Andy Gallo:

Review by Lost in a Book

I get it. I totally get why there are mixed reviews on this book. Especially if you’re comparing them to some of the Anyta books we know and love. You know, those light hearted, quirky, with witty banter, slow burned to the brink of death, and a lightness that you just feel like you can float away on? Yep, those. If you’re an established Anyta fan girl/boy like I am, I had a hard time not comparing the feels in this to the ones I’ve read in the past. And when I really thought about it, not all of her previous writes had that light hearted feeling. One of my favorites is her novella Bird Meets Cage that isn’t at all like her other books. Or Rock. Once I checked my preconceived notions at the door, I enjoyed the hell out of this one with all of its sad, heartbreaking heaviness; Because on the outskirts of all that melancholy is hope and light and self-sacrifice

”Do you believe there are things in this world that can’t be explained?”

In (Un)Masked it’s possible. Lethe is the last living member of a cursed bloodline and the curse makes it almost impossible for him to let his guard down to live and love, until he meets Jay. Jay sees Lethe for who he is. Their journey is difficult and many times seems impossible. This book is completely unique and very little can be revealed without ruining the heartbreakingly beautiful story that Anyta Sunday and Andy Gallo created. It has a mysterious feel and I was rooting desperately for them to beat all the odds stacked against them.

The love between Lethe and Jay was perfectly imperfect. They got their HEA that almost bordered on the HFN end of the spectrum. They had chemistry but there was very little sexy times and those that were on page weren’t explicit. Normally I’m all gimme the sex, but the quantity and heat level fit the bill for the obstacles the MCs faced.

Gristle. Oh Gristle. I loved you so hard. I was planning little Gristle/Jay babies. But alas, they were just friends soulmates. Gristle and Jay’s love ran so deep that I hurt for them. My face leaked at the sadness surrounding Gristle from the very beginning all the way through. He added so much life to this story that I considered him a third main character.

This book was really well written and I couldn’t put it down. I had to know what was going to happen which is my favorite type of read. Definitely recommended.