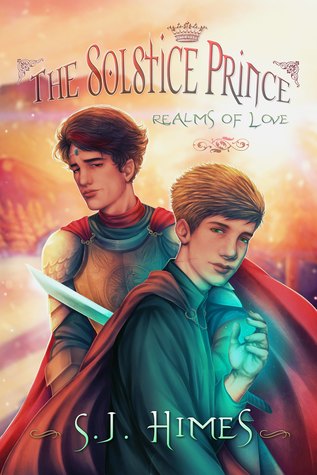 Ahhh, yes. This book went down like hot chocolate on a cold winter day with tons of marshmallowly fluffy goodness. I’m all warm and fuzzy thinking about the absolute sweetness that was The Solstice Prince.

I’ll provide full disclosure and admit that I chose to read this because the cover reminded me of a M/M Harry Potter. Not. Even. Lying. *shrug* I’m weak when it comes to that series. While it wasn’t similar to HP, it held its own special place in my heart with its loving kingdom, drama free plot, gifted healer, and a fierce but kind prince.

We are introduced to a broken down Jaime who had been taken from his home after the death of his father, sold into slavery to pay debt, and rescued by Pyrderi guards and brought to the palace. He doesn’t know where he is or the rules of the land so he keeps his head down and works the kitchens. Jaime’s very skittish from abuse and hides that he’s a healer until he heals the Captain of the Guard. This revelation leads to a whirlwind life change where he becomes properly acquainted with the dashing Prince Maxim.

Prince Maxim is the youngest of his siblings and absolutely smitten with the man he saw rescued from the slave ship. He makes his intentions known towards Jaime quickly and begins to court the shy healer. Prince Maxim is large, a hunter, and the best swordsman in all the land. But, he approaches Jaime like he would a skittish animal until he can coax him out of hiding. He shows Jaime that he is worthy, kind, gifted, and desirable. *swoon*

Guys!!! This book is drama free. It’s sugary sweet and Prince Maxim with Jaime is absolutely adorable. There aren’t any relational issues so the men are able to organically grow together in friendship and affections without the lack of communication blah blah blah hurdles. Although this book has a lighthearted fluffy feel, it’s not without minor angst and strong feels. Jaime’s prior circumstances and Prince Maxim’s impending heartbreak provide obstacles and instead of acting as a deterrent, it brings the men together. The palace has clouds of sorrow hanging over it and Jaime provides rays of sunlight to all.

I loved the Pyrderi people and its royalty. It’s an accepting land that shows love instead of scorn. The inhabitants of the castle from the King to servants were friendly, loving, and understanding of a man that was utterly broken and needed a place to feel safe and find himself again. They all celebrated the young Prince and his love to the blushing Jaime.

The Solstice Prince is a feel good HEA read that provided the warmth I was looking for. Could there have been more relationship development on page? Yep, but I just didn’t care. Sweet story. Lovable secondary characters. Swoontastic MCs. Fabulous cover. Definitely recommended.