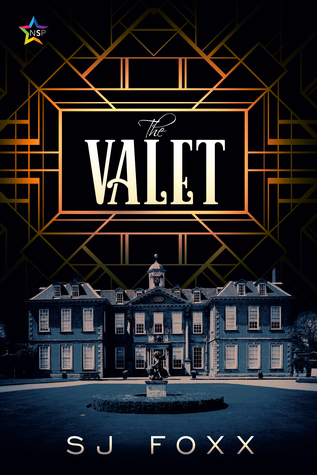 Warning…This book contains LOTS of sex. Could it be deemed gratuitous? Yep. Did I mind? Not at all. For some reason, this historical porny-land didn’t grate on my brain like a book driven by sex typically would. So yep, lots of sex. You’ve been warned.

Well well well, this one took me completely by surprise. How is this S.J. Foxx’s debut novel? Bravo S.J. Foxx, Bravo! I know this isn’t a surprise anymore but I LOVE historical M/M romance. Regency era is my preferred but I dig 1920s and older. I say all that because I’m a picky bitch about them and I really enjoyed this. It was engaging, well written, entertaining, endearing, and hot AF. Two words… feather. duster. I’ll let that sink in while I give you the run down.

Hugo is a spoiled rich kid at 20 years old that was found in bed with another man’s wife (Don’t worry, he’s a big fan of the peen). After bringing shame to the family name, he gets shipped off to his dear ol’ Aunt and Uncle in England. If he doesn’t straighten up his act over the next year, he’ll lose his inheritance and be cut off. Hugo is whiny and self-destructive when given any opportunity. After arriving at Finchley Hall, he meets Sebastian, who soon becomes his valet. Hugo notices right away the mischievous smiles and wicked gleam in Sebastian’s eyes after every encounter and quickly becomes enamored. After Sebastian finds evidence of Hugo’s preferences, he wastes no time in providing creative ways to pass the hours.

Sebastian was fucking awesome. He was cheeky, rebellious, assertive, dominant, sexually creative, and could reduce Hugo to a whimpering puddle of needy submissive goo with single look or tone of voice.

“Whilst we’re still sleeping together, you have to know that you don’t own me. I work for you, but you answer to me. Is that understood?”

He had class elitist Hugo role-playing as a valet and getting off on it all the same. Sebastian had him making beds, getting him dressed, cleaning and shining dishes and Hugo was hard as a rock every time and begging for more. Sebastian was a forward thinker and fucked Hugo with the feather duster shaft after making him dust the room.

Two birds. One stone and all that…

There was also humiliation kink, some spanking, and public sex which didn’t disappoint. There’s a lot of heat between these two and naturally that leads to some sex. A lot of smexy times are to be had by all.

Due to his station, Sebastian was deemed lower class which made the power exchange in the relationship all the more enjoyable and special. Along with all the heat, there were sweet and caring moments that provided depth to their relationship. It wasn’t all rainbow and snowflakes though. Hugo could be an arse when he was in one of his bratty moods. As I mentioned before, he’s self-destructive and for the first half lashed out at Sebastian for his own shortfalls. Hugo does realize the err of his ways and feels contrite about his treatment of Sebastian. They get their HEA in the end but it takes some work between them and also overcoming the other obstacles life throws their way.

Trigger warnings: There is drug use and an attempted sexual assault.

I enjoyed this book and would recommend it to readers that like an entree of historical romance with a big giant overflowing scoop of sex on the side.